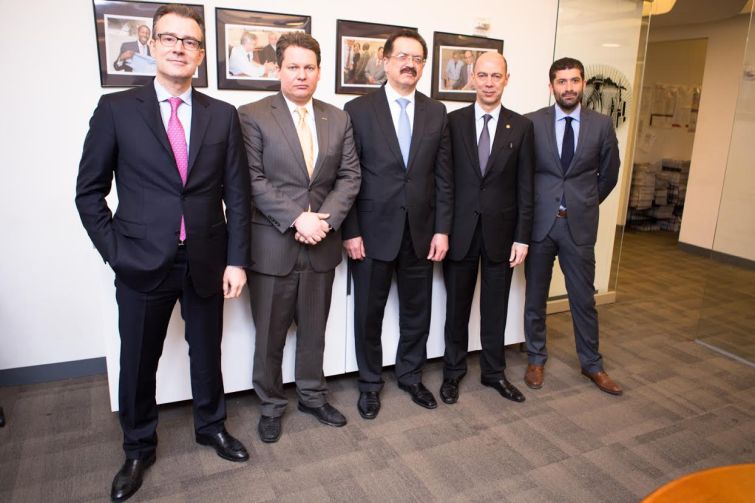 A group of Greece-based construction supply companies have come stateside to expand their exports as their homeland contends with a tough economic recovery.

Executives from companies that make metal, windows and kitchen sinks have been meeting with New York construction leaders over the last couple of days to discuss possible relations that would put their products in buildings across the city. While forging those relations and exports are at the early stage, they and Greek-American business leaders are confident they’ll build up the Big Apple.

“This is where a lot of construction takes place,” said Louis Katsos, the chairman of the

Construction, Development, Design & Construction Committee of the Hellenic-American Chamber of Commerce. “Everybody was extremely enthused both on the Hellenic side and the American side.”

This is just the latest in international companies looking for a new home in New York. A German developer opened a New York branch on Park Avenue; British leasing and investment continues to grow in the city; and French executives are investing in droves.

This week’s trip was born from a relationship between the Greek-American chambers of commerce in New York and Athens, according to the leaders of both organizations. Mr. Katsos had discussed forming better construction relations with Simos Anastasopoulos, president of the Athens-based American-Hellenic Chamber of Commerce. Mr. Katsos traveled to Greece last November and gave a presentation on the opportunities for companies—particularly in construction—in the U.S.

He arranged for a group of nine Greek delegates to meet one-on-one with nearly 80 business executives as well as media outlets like Commercial Observer in New York City between Tuesday and today—even celebrating Greek Independence Day on Wednesday. The trip is capped off with a panel discussion tonight on construction in the city hosted by Hellenic-American Chamber of Commerce.

While the executives’ companies have always dealt with exports, the entire Greek economy has been hit hard by the recession—construction shrank 77 percent in Greece between 2005 and 2011, according to reports.

As a result, more and more Greek companies are focused on exporting to keep themselves afloat, they said.

“It’s become more typical for medium-[sized] Greek companies to look at exporting,” said Nikolaos Bakatselos, a managing director at Pyramis, which makes kitchen sinks with only a small market in the U.S. right now via Ikea. “Because this is the way to survive.”

Most of their companies are surviving on the back of exports to markets such as Canada, Australia and partners in the European Union. If they’re going to make it in New York, it will take precision that they’re willing to embrace, said one delegate.

“It’s a very tough market. You have to be always perfect,” said Kyp Bazenikas, the president of Alumil’s U.S. operation, which makes curtain walls and window walls. “If you do a mistake, you cannot get away with it. It’s a great market, everybody wants to be here. But at the same time it’s a very demanding and very tough market.”

Mr. Bazenikas said his company moved here in 2008 and has since expanded to employ 70 workers. Alumil’s most recent work is at Google’s new offices at 111 Eighth Avenue, Mr. Bazenikas said. He’s learned that the city’s market is unlike any other in the country—no room for mistakes and deadlines are paramount, he added.

Mr. Anastasopoulos said Greek business leaders are ready for that challenge and hope to continue

“We need to deliver,” he said. “But the message was well-understood and well-received.”