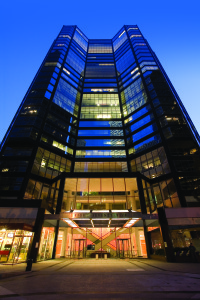 The JPB Foundation, a non-profit organization that funds initiatives for a host of causes, has signed a 15-year lease for 30,000 square feet in Midtown’s Plaza District, according to Crain’s New York Business.

The Foundation will move into 875 Third Avenue, a 720,000-square-foot office building between East 52 and East 53rd Streets. Crain’s reported JPB will take the top floor of the 29-story tower and that asking rents were $86 per square foot. It will be relocating from the Solow Building at 9 West 57th Street between Fifth Avenue and the Avenue of the Americas.

“This is a premier Midtown East trophy building, and an ideal location for the historic JPB Foundation,” said Mr. Glickman in prepared remarks. “The penthouse features 20-foot ceilings with extraordinary views of the East River and Midtown Manhattan.”

Cushman & Wakefield did not immediately respond to a request for comment.

The property at 875 Third Avenue was built in 1983 and was designed by Skidmore, Owings and Merrill.

According to its website, the JPB Foundation focuses on tackling poverty, medical research and sustainability issues. It boasts an impressive list of advisory board members, including Lilliam Barrios Paoli, the commissioner of the New York City Department of Aging, Geoffrey Canada, the president and CEO of the Harlem Children’s Zone and Jonathan F.P. Rose, the president of Jonathan Rose Companies.