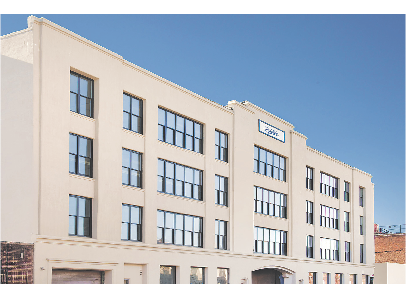 Award-winning film studio MediaStorm will join the ranks of other entertainment companies and film producers at 1000 Dean Street, which is nestled between Franklin and Classon Avenues.

With 3,800 square feet, MediaStorm will be the biggest media tenant in the building, according to Chris Havens, an associate broker at aptsandlofts.com, who represented both sides in the deal.

After eight years of renting in the startup-heavy hood of Dumbo the company “just couldn’t justify the increase in rent” that landlord Two Trees was proposing, said Brian Storm, founder of MediaStorm. Mr. Storm said the new space is almost exactly like its old one at 20 Jay Street, “except it’s 43 percent less expensive.

Prior to its Jay Street days, MediaStorm had started out at 55 Washington, but left when Etsy needed to expand its offices within the building.

“We knew Dumbo was going to expand, and frankly the same thing is going to happen here in Crown Heights,” Mr. Storm said. “This is the New York story. In the short run we are excited about Crown Heights, but you have to keep your eyes opened to what’s happening.”

Mr. Havens said the Brooklyn office market is in a place he’s never seen before. In fact, he said it is the tightest market since World War II.

“These days, if creative people want a nice place they go to Bedford-Stuyvesant or Crown Heights,” Mr. Havens said.

The 140,000-square-foot, four-story building at 1000 Dean Street has an 1,500-square-foot retail space and can house up to 28 tenants. Andrew Jive Productions, Pellicule, and Robotic Raptor are just three of the 10 film companies in the building, which has a 25 percent vacancy rate, Mr. Havens said. The building also has a 7,500-square-foot garage with 20-foot ceilings that the landlords plan to renovate, Mr. Havens said, and hopefully rent to a performance arts-related group.