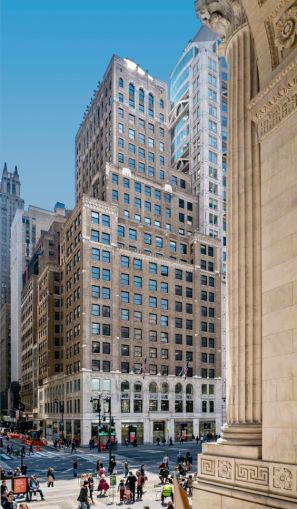 Penske Media Corporation, the parent company of publications like Women’s Wear Daily and Variety, and VOA Associates Architecture, a global architectural design firm, will relocate its New York City offices to the 24-story property across from Bryant Park between East 40th and 41st Streets. The media company is leasing 56,000 square feet on the second, third, 14th and 16th floors, and the architecture firm grabbed 15,375 square feet for the entire 12th floor, The New York Post reported.

Douglas Neye, Cynthia Wasserberger, Shawna Menifee, Frank Doyle and Dan Santagata of JLL market the property’s office space, according to the publication, but representatives for JLL didn’t immediately respond to requests for comment and more information about the deals.

Officials at Penske, which currently operates its local offices at 120 West 45th Street, didn’t respond to a request for comment or the names of the company’s brokers. But VOA signed a 15-year agreement and will move from its current space at 27 West 20th Street in May, said the firm’s broker, Greg Taubin, an executive managing director at Savills Studley.

The property commands asking rents from the mid-$70s per square foot to the low-$100s at the top of the building, the Post reported.

Torchlight Investors, Square 1 Bank and Daikin signed respective leases for a collective 28,190 square feet at 475 Fifth Avenue over the summer, as Commercial Observer previously reported. TIAA-CREF purchased the building for $143.9 million in 2011, according to property records.