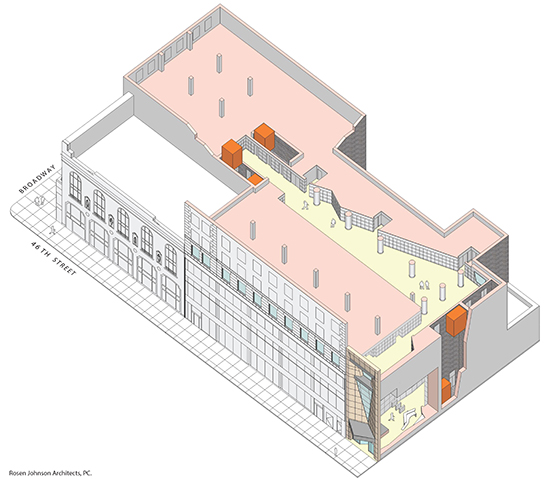 A rendering of the new first four floors of 1560 Broadway. (Rosen Johnson Architects)

Three is better than one—in buildings as much as anything else. Landlords SL Green Realty Corp. and Jeff Sutton at 1552 Broadway and Newmark Holdings and the Benenson Family at 1560 Broadway tapped Rosen Johnson Architects to figure out a way to link their two buildings, and smush in a third in between the two (which was demolished). Rosen Johnson principals Paul Rosen and Anthony Johnson designed an innovative new scheme for the space with great retail potential just off Times Square.

The nearly completed digs also lend better traffic flow for the hundreds (or thousands) who audition for productions of all types in the offices of 1560 Broadway’s main tenant, Actors’ Equity, a labor union for actors and stage managers. The two building owners demolished an existing small building Newmark purchased between the two structures, combined the bottom three floors of the buildings into new retail space and implemented a new sky lobby on the fourth floor to serve as indoor waiting space for Actors’ Equity. The architects pulled off the stunning conversion even though the landlord partners from both buildings had some difficulty imagining how they would do so, said Brian Steinwurtzel, the principal of Newmark.

“We basically met, and together between their team and our team, we hatched out a plan to create value by bringing 1552 Broadway’s retail back to the building,” Mr. Steinwurtzel said. “We knew that Times Square retail would add a lot of value, but we didn’t know how to do it.”

The clothing store Express already opened a three-story, 22,500-square-foot outlet on the Times Square side of 1552 Broadway in February. But workers are currently putting the finishing touches on three new roughly 15,000-square-foot floors of prime retail space, with the partners at 1560 leasing the space to SL Green and Mr. Sutton’s Wharton Properties. “There’s a large expanse of very valuable retail space created for big-box retailers,” Mr. Rosen said.

A new ground-floor entrance for 1560 Broadway, now east of its former location on West 46th Street, allows visitors to go up to the fourth floor through a marble-lined lobby with four new shuttle elevators. “One of the challenges was to make the lobby prominent and also accessible from [Avenue of the Americas] and Broadway,” Mr. Rosen said. “Brian’s charge to us was to create a prominent lobby, sky lobby and entrance that would be first class. The old lobby was somewhat less than that.”

Messrs. Rosen and Johnson showed off the 100-foot-long sky lobby at 1560 Broadway during a recent tour with Commercial Observer. The space with new public restrooms opened July 14, helping the visiting throngs who audition in the Actors’ Equity space that now gets service from direct dispatch elevators running to the top floors of the 17-story tower. The pair who started their firm about two decades ago expressed satisfaction with the results. “The sky lobby becomes a little city, a little village, doesn’t it?” Mr. Rosen said. “It’s an actors’ village.”

And one new feature of that village opened just last month. Massimo Felici of Gourmet to Go, who operates 15 coffee shops in commercial buildings around the city, opened doors to a 1,600-square-foot coffee and snack bar supplying the building’s tenants and visitors with the food and drink they need to get through the day without the hassle of a trip to Times Square and elbowing past other thespians on their way to work.