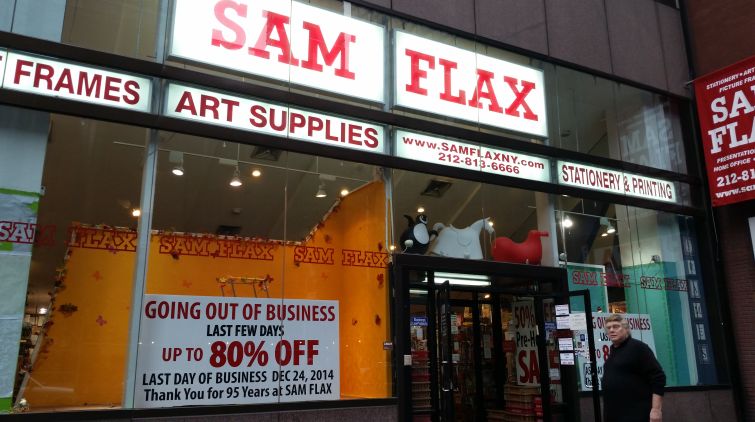 Sam Flax‘s 10,082-square-foot Midtown headquarters is closing its doors after 95 years in business.

Much of the stationery, gifts, toys, albums and art supplies at the store at 900 Third Avenue between East 54th and East 55th Streets is marked down for sale before the store closes up shop on Christmas Eve.

Bino Alves, visual merchandiser for the store, said the store’s doors at Paramount Group‘s 35-story building will shutter for the final time at 6 p.m. on Dec. 24. As the last day approaches, employees have been quitting, he said, leaving only 15 still on staff.

During a visit over the weekend, an employee said that the rent was too high and there wasn’t enough business.

Sam Flax—which has 3,277 square feet on the ground floor, 4,849 square feet on the lower level and 1,956 square feet of storage space in the sub-lower level—is actually terminating its lease early; it still has 10 years left on it, a source with intimate knowledge of the situation said. And that is with Sam Flax paying less than $100 per square foot in rent. The new asking rent is expected to be around $200 per foot.

Mr. Honigsfeld didn’t immediately respond to an email request for comment and nor did Paramount.

CBRE‘s Eric Gelber is marketing the space for Paramount. He didn’t respond to requests for comment.