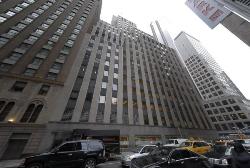 The sale totaled $600.9 million and closed on Dec. 18, property records made public two days ago show.

Vornado announced the transaction without identifying the buyer along with a $605 million sale price last month, as Commercial Observer previously reported. The real estate investment trust said the deal for the building, which spans the whole block between West 55th and West 56th Streets, amounted to a $484 million tax gain for Vornado. The discrepancy in price wasn’t immediately explainable as neither company immediately responded to a request for comment. It had been speculated that Blackstone was the buyer.

Vornado put the 26-story building on the market in the summer with Darcy Stacom and Bill Shanahan of CBRE, Crain’s New York Business reported in July. L Brands, the parent company of Victoria’s Secret and Bath and Body Works, is the building’s largest tenant, leasing 99 percent, according to a spokesman for Blackstone.

“We believe there is potential long term upside given the asset’s prime location adjacent to the developing 57th Street residential/retail corridor and its unique rooftop signage visible from Time Square,” the Blackstone spokesman said.

A CBRE spokesman said the firm declined to comment.

Update: This story was edited to include remarks from Blackstone.