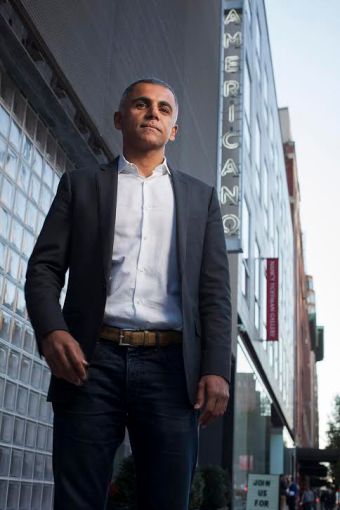 In 2007, long before West Chelsea became synonymous with chic and the High Line became an international sensation, Ashwin Verma of Siras Development planned to buy a plot of land for construction. The site, like many parcels of land near the West Side Highway, was then home to an auto body shop.

“There were a couple of guys in overalls, [and] when they heard that we wanted to buy this lot and build a hotel, they were pretty surprised,” recalled Mr. Verma.

But Mr. Verma and his partner, Saif Sumaida, could sense the area’s promise. The duo acquired the land and in 2011, Hotel Americano opened its doors at 518 West 27th Street. Today, the boutique property serves as a de-facto arts club for West Chelsea, the epicenter of the contemporary arts world.

“I think part of being a developer is being able to have a vision for the future that other people can’t see,” said Mr. Verma, sitting in Americano, the French-Latin fusion restaurant in the hotel’s monochromatic lobby. “A lot of the time what happens is, a project or an infrastructure project is announced and most people believe that it’s an urban myth until it actually happens.”

Since 2001, Mr. Verma has been using his development acumen to predict Manhattan’s next hot neighborhood and how best to capitalize on it. In 2007, he started Siras with Mr. Sumaida and has since transformed underutilized properties across the borough’s Lower West Side.

“With the strength of our development, engineering and sales experience, Siras has created a platform that executes successful and innovative development projects on a consistent basis,” said Mr. Sumaida of his company.

Mr. Verma believes the West Side’s industrial past has created a foundation ripe for reconfiguration. “When you have these large industrial footprints, you’re really giving a wonderful canvas for developers and architects to create something special,” he explained.

Today, Hotel Americano is thriving. According to Marco Cilia, the hotel’s general manager, year-round occupancy is roughly 90 percent, attracting guests mostly from the arts, fashion and design worlds. The rooftop pool is incredibly popular during the summer months, and Mr. Cilia credited the High Line’s popularity for contributing to the hotels’ success.

“There’s more than 10 million people walking the High Line throughout the year,” he noted. “The view of the High Line from the hotel is fantastic, and vice versa.”

Having witnessed the evolution of West Chelsea, Siras has doubled down on investing in the neighborhood. The company, in conjunction with Singapore-based Oriel Development, is now constructing the Soori High Line at 522 West 29th Street, a residential property that is attempting to transform the splendor of city living.

“People want to be in New York, but when they go to their homes, they want to be transported away,” Mr. Verma emphasized.

When completed, the Asian-inspired luxury condominiums will have 27 units across 11 floors. Noteworthy details include units with two to five bedrooms each, 14-to-18-foot ceilings and interior heated swimming pools. (The Observer previously reported that the 16 private pools planned will range from 23 to 26 feet long and 7 to 9 feet wide.) Residences on the ground floor will enjoy their own private courtyards.

The building will fit in nicely with the wildly-expensive luxury apartments around it. The Observer reported that prices for the exclusive units will range from $3.6 million to $22 million.

When asked about Soori High Line’s unique inclusion of pools into its design, Mr. Verma stressed that the firm’s experience with development and engineering makes the project less daunting.

“We have the ability to really innovate and be on the cutting edge of development and construction,” said Mr. Verma. “Whereas pools would be something that would be very intimidating for something to take on, for people like us, it’s something we feel very confident about.”

Though Mr. Verma said the building is not specifically targeting Asian buyers, he did cite Mr. Chan’s ties to that market as an added bonus.

Mr. Chan elected to work with Mr. Verma and his team for his first U.S. project, signaling his confidence in Siras’ vision.

“Soori High Line marks my U.S debut, and I needed a development partner with local expertise,” said Mr. Chan. “Ashwin, Saif and the Siras team have a strong track record developing throughout New York City and especially around the High Line, with a shared commitment to great design.”

Now that West Chelsea and the area surrounding the High Line has been completely saturated with development, Mr. Verma sees Hudson Yards as the logical next frontier for investment. Siras’ luxury Hudson Rise Hotel on 462-470 11th Avenue will include both hotel rooms and condominiums. When completed, the soaring 700-foot property will include 420,000 square feet and 242 guest rooms.

In July, Forbes reported that Siras, along with its partner Kuafu Properties, purchased the land for $62 million. The article also noted the purchase included five adjacent parcels on the corner of 38th Street. The project is designed by Archilier Architecture, which has worked on a number of luxury hotel projects throughout China.

Shang Dai, the CEO and principal of Kuafu Properties, recognized Mr. Verma’s contributions to the project.

“Ashwin is very diligent and also he brings a lot of the connections he has in the city to the project,” said Mr. Dai. “We like him and we trust him.”

Groundbreaking for the hotel is slated for mid-2015.

“If you fast forward three or four years, the Hudson Yards is going to be a new epicenter for Manhattan,” he said.