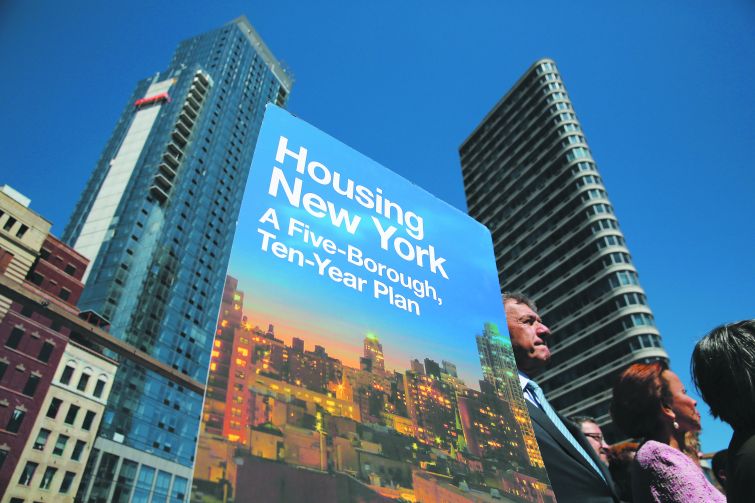 The Mayor's plan calls for creating or preserving 200,000 units of affordable housing over the next ten years.

“Nobody stormed out, so that seems like a good thing,” she said.

As Ms. Glen and Mayor Bill de Blasio move toward a new zoning policy in the administration’s quest to create or preserve 200,000 units of affordable housing over the next decade, the city’s top real estate leaders are watching to see whether the mandatory affordable units will entitle developers to build enough density to make large-scale projects economically feasible. Regardless of the complicated politics and some key missing details at the moment, the administration is talking with all sides of a fraught debate in pursuit of guidelines that Ms. Glen predicts will be “game-changing” in a city with a housing shortage.

The administration’s recent pronouncements on the issue reflect a key plank calling for mandatory affordable units in the 117-page housing plan Mr. de Blasio unveiled in May. The $41.4 billion “Housing New York” blueprint summarizes 50 initiatives aimed at reducing numbers like the nearly 55 percent of New Yorkers who spend more than 30 percent of their incomes on housing and the more than 30 percent of city residents who devote over half their incomes to housing. The city’s 3.1 percent rental vacancy rate falls far below the national average of 9 percent, according to the housing plan.

But while real estate leaders say they too want to build more affordable housing, they are waiting on key indicators like the exact percentage of affordable units that will be required, the income levels of tenants served by the affordable units and, perhaps most critically, the amount of market-rate housing density the administration will trade for the lower-rent units.

“The mayor has laid out a lot of things on a macro basis but has laid out few granular details,” said Massey Knakal founding partner and Chairman Robert Knakal, who said he’s made it clear to Mr. de Blasio in meetings with the mayor that an aggressive approach might exert pressure on land values and hinder the building of any affordable units at all. Mr. Knakal added, “The elected officials can create as many affordable units as they want, provided that they provide the economic incentives to create that housing.”

In an initial test of balancing between density and affordability, the de Blasio administration won a commitment from a development team that includes Alma Realty to increase the number of affordable units in a rezoning on the Queens waterfront at the Astoria Cove site.  The developers would build 34,103 square feet more residential space overall with 50 additional affordable units over its initial amount to net a total of 345 required affordable units, or 20 percent, of the 2.2-million-square-foot, 1,723-unit mixed-use development, under an outline of the agreement spelled out in the Final Environmental Impact Statement the Department of City Planning released Sept. 19. (The City Planning Commission recommended approval of the proposal on Sept. 29 ahead of its appearance before the City Council.)

But with some wondering whether subsidies, the more traditional approach to fostering affordable units, will boost the overall number or perhaps speculating how Astoria Cove might set a pattern for future rezoning, Ms. Glen didn’t rule out potential subsidies for more affordable units and cautioned that Astoria Cove won’t amount to the standard for an area like, say, East New York.

“We’re studying all the various facets of what that will look like,” she told Commercial Observer in an interview about the mandatory affordable plan. “Each neighborhood is different, so we’re trying to create an inclusionary zoning program where every neighborhood is not the same. We really need to calibrate this correctly.”

Yet, in any potential future rezoning in any part of the city, the balance between the height of new towers and the number of required below-market units will represent the “grand bargain,” said Donald Capoccia, the managing principal of BFC Partners, a large developer of mixed-income projects. BFC is currently topping out a 250-unit tower at City Point in Downtown Brooklyn that will be 50 percent market-rate, 30 percent middle income and 20 percent low-income and is closing on financing for its joint 50 percent affordable venture to build the 1,000-unit Essex Crossing complex at Seward Park on the Lower East Side. Developers like BFC will invest in new projects if the mayor’s team provides sufficient additional density to developers in exchange for the affordable units, said Mr. Capoccia.

“We really want to see [the mayor] succeed,” Mr. Capoccia said. “We tried to provide as much support as we could to the housing plan, and we would like to see it executed. They are definitely putting their money where their mouth is in terms of getting this production pipeline started up quickly.”

Officials at the Real Estate Board of New York echoed that sentiment, although REBNY President Steven Spinola said the organization “would need to see the details” of the required inclusionary zoning plan before commenting on it directly.

The mayor’s office consulted with more than 200 stakeholders and 13 city agencies on its housing plan, according to its introduction. With real estate professionals watching closely and groups like an assemblage of housing advocates and construction unions called the Real Affordability for All Coalition pushing their own plan to require 50 percent affordable units in every development, the administration is attempting to find common ground.

“Given the size and scope of our program, we need lots of people to participate,” Ms. Glen said. “We’re talking with everyone about how we can work together.”