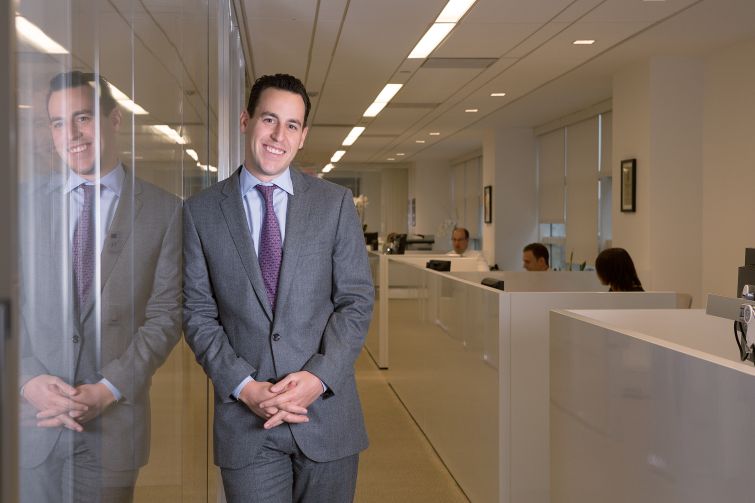 The director of leasing for the privately held owner, operator and property manager, Mr. Wiener partners with veteran David C. Berkey, and the duo, along with Samantha Fishbone, are tasked with leasing the firm’s 6.5-million-square-foot portfolio of Class A commercial office buildings primarily in Manhattan.

While Lego recently held its grand opening, its deal dates back nearly two years ago, with the toy company signing a 10-year lease for nearly 8,000 square feet at 200 Fifth Avenue, which is between 23rd and 24th Streets and across from Madison Square Park.

Fidelity Investments occupied the space, and L&L wanted to replace the financial institution with a cool tenant.

“We wanted someone creative that would jive with Eataly and Marimekko and just the overall feel of the neighborhood and the tenants above,” Mr. Wiener said during an interview last week at L&L’s offices at Metropolitan Tower, at 142 West 57th Street, where the company owns the commercial condo portion.

There was a temporary snag as Fidelity didn’t want to terminate its lease early enough for Lego to open on time.

“We searched long and hard and when we found Lego and they came to the building, I took them to the park and said, ‘Look around. Look how many people are here. Look at the residential buildings that are going up around you. This is a neighborhood of young families, and it’s a young up-and-coming neighborhood. It was proven by Eataly. It was proven by the tenants coming in.’ And they loved it.”

That was part of what convinced Lego to hold out on finding another space.

The building is also home to Tiffany & Co., which two years ago leased the entire 57,691-square-foot eighth floor at 200 Fifth Avenue, bringing the jewelry company’s footprint to 405,489 square feet. Mr. Wiener worked on that deal, too.

A bit south at L&L’s 114 Fifth Avenue at the southwest corner of 17th Street, Gawker, known for verticals Gizmodo, Jezebel, Valleywag and Deadspin, signed a 15-year lease last month for 58,900 square feet. Mr. Wiener said the taking rent was $76 per square foot in a deal that includes the floors with the highest ceilings, at 17 feet, and oversized windows. The asking rent was $78 per foot.

“The Gawker deal was a pleasure to work on because of Andrew’s ability to respond quickly with accurate information to keep the deal on track,” said longtime friend Jonathan D. Tootell, a managing director at Newmark Grubb Knight Frank who co-represented Gawker in the deal. The duo met at C&W 10 years ago, and while they hadn’t worked on a deal together until Gawker, they have attended “Rangers games, Knicks games, pick-up basketball games at Carmelo Anthony’s private court and real estate functions where you take 10 to 15 minutes to catch up on life.”

L&L spent north of $45 million for a new, wider lobby at 114 Fifth Avenue, along with new elevators and a tenant-only 7,000-square-foot rooftop, slated to open at the end of this month. The building opened for occupancy a month ago when Mashable and Mastercard moved in. Mashable, the tech and social media news blog, became L&L’s first long-term tenant at the office tower when it signed a lease in January.

The “premium rent proves what we’re doing with the redesign” and is a “justification of our investment,” Mr. Wiener said.

His most challenging deals were the first two at 114 Fifth Avenue, to Mashable and Mastercard, the multinational financial services company. “The entire building is vacant, you are spending tens of millions of dollars on this redevelopment and you are searching the market for that first tenant who will launch your leasing campaign. Leasing is really all about momentum and leasing begets other leasing, which is currently happening at 114.”

Mashable and Mastercard were looking at the same spaces at 114 Fifth Avenue, with the former wanting three floors and the latter seeking two. In the end, Mashable scaled back to two floors and Mastercard increased to three. Both companies had to take possession of their respective spaces in March 2014, but L&L was planning on delivering the spaces two months later. So L&L moved up the possession dates to accommodate the tenants.

Other tenants at 114 Fifth Avenue, which is about 80 percent occupied, include advertising agency AKQA and news website First Look Media.

Sacha Zarba, an executive vice president at CBRE, has gotten to know Mr. Wiener particularly well over the last 18 months, having been across the table in the Mashable and AKQA deals. Of note, he said, is Mr. Wiener’s ability to manage expectations from the outset.

“Andrew has a terrific sense of the technicalities involved in this business,” Mr. Zarba said. “He takes time to understand what’s important to tenants and strives to provide for it and he also takes the time to convey from the start what elements are important to him and his partners.”

While Midtown South has become a magnet for firms in the so-called TAMI sector—technology, advertising, media and information technology—there is also increased interest from other sectors.

“TAMI is the key phrase of the day, but you see a lot more boutique financial firms starting to look here as well,” Mr. Wiener said, citing Mastercard as an example. Also, there has been new interest from fashion companies.

Mr. Wiener, 31, has quickly ascended in his career. He was recruited in July 2010 from C&W by Mr. Berkey as an associate director of leasing before being promoted to a director two years ago.

L&L partnered with Related Companies in a failed 2010 bid to buy a stake of 1 World Trade Center. The people on the other side of the table questioned the small size of the L&L group, Mr. Berkey said. When they stepped back, the L&L executives realized they needed to beef up the team. Mr. Berkey interviewed a slew of candidates, he said, but when Mr. Wiener came in “it seemed we were meant to work together.”

Qualities Messrs. Berkey and Wiener apparently share are a straight-forward approach, a commitment to delivering what is promised and an easy-going disposition.

Mr. Wiener, who is the co-chair of the New York Real Estate New Leadership Division of Israel Bonds, got his start in the business in the summer of 2004 as one of a dozen interns in C&W’s first formal intern class working in the research department.

A year later he was hired, and worked in C&W’s Midtown and Downtown offices. He focused on tenant representation and transaction management. Mr. Wiener was then promoted to an analyst position in C&W’s strategic agency services group in the New York City office.

Mr. Wiener, a Long Island native and Upper East Side married father of one, was bound to leave C&W as he knew early in his career that he wanted to be on the development side of the business.

“I didn’t want to just lease space that was just sitting there,” he said. “I wanted to be part of the purchasing of a property, the development of a property. [David W. Levinson and Robert T. Lapidus, the co-founders of the 14-year-old firm] are the visionaries for L&L. Getting to watch the architects and the construction companies and the engineer companies reimagine these buildings is just really awe-inspiring. And it’s great to learn from.”

When asked if he wants to be a developer himself eventually, Mr. Wiener responded: “Isn’t it every guy’s dream to be able to do what David [Levinson] is doing? I think it’s exciting.”

Mr. Levinson has an understanding of tenant needs and is able to fulfill them when reimagining a building, Mr. Wiener said. For example, Mr. Levinson created terraces for Grey at 200 Fifth Avenue, plus a “gorgeous courtyard that you can see from every floor in the building.” The advertising giant moved into the building toward the end of 2010. “Certain developers look at assets and can reimagine them and maybe put lipstick on a pig, David really looks past that and says, ‘How can I make this building the best building it can be?’ ”

Mr. Wiener has impressed the leaders of L&L.

“He continually leases space out at numbers above pro forma,” Mr. Lapidus said. “He has exceeded our expectations when it comes to the economcis and the quality of the tenants that we want to have.”

“TAMI is the key phrase of the day, but you see a lot more boutique financial firms starting to look here as well.”