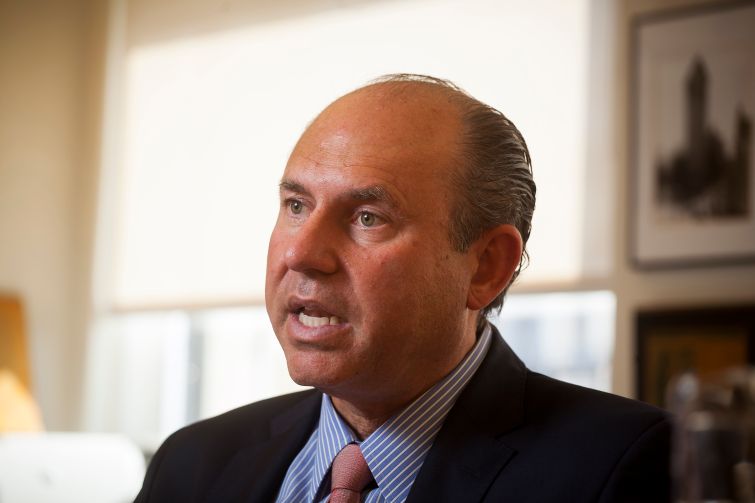 Fresh off of putting the finishing touches on the purchase of a retail property in Astoria, Queens, ABS Real Estate Partners President Gregg Schenker invited Commercial Observer in to his office overlooking Union Square. In a space decorated with family pictures and closing sale and financing binders, the 48-year-old married father of two explained the vision behind the 335-employee company and its 6-million-square-foot portfolio primarily in Midtown South. Mr. Schenker, a Manhattan native and New York University alum, also dished on new deals like the Queens acquisition he and an ABS team had just completed. The buy didn’t represent the company’s first in the boroughs, nor the last, he hinted. But before hitting the outer boroughs, CO asked the former Helmsley Spear broker how he and the other company execs knew to invest in Midtown South and why technology, advertising, media and information, or TAMI, tenants like the neighborhood so much.

Commercial Observer: Can you tell us about tech educational company General Assembly’s 13,348-square-foot expansion to a total of 40,158 square feet at 915 Broadway?

Mr. Schenker: When General Assembly first moved into 915 Broadway about five years ago they had one floor under lease across the street at 902 Broadway, and they were looking to expand by leasing one full floor at 915 Broadway. They’ve since grown to occupy three full floors. Those floors are approximately 13,000 square feet each.

ABS manages 915 Broadway and some of its executives and other investors own the property. What’s been ABS’ role at the office building over the years?

The original ABS-related partnership that owned the building was formed in 1981, and they held the property through the period up to two years ago. Then about two years ago, we recapitalized the property with a new group of owners. The only original owner that stayed in the deal or in the investment is Earle Altman. We brought in a mix of a group of our longtime partners to own the building with us going forward.

What other Midtown South properties are in ABS’ portfolio?

We’re in the process of acquiring the [2,560-square-foot] retail space in the brand new Toll Brothers condominium on Third Avenue and [East] 22nd Street. It’s a wonderful retail space with excellent frontage and high ceilings in a brand new building. It offers a tenant a significant opportunity for presence and for signage because of the frontage and the height of the glass. In addition to the width of the frontage, the height of the glass front and the signage that can be created there is excellent. At 20 West 22nd Street, which is between Fifth [Avenue] and [Avenue of the Americas], we have a ground-floor space available. That can be combined with the second-floor space. There’s an internal elevator that we put in many years ago. Many of our properties in Midtown South, in particular, are fully leased because the demand is so high and there’s a limited supply.

The inventory in Midtown South is significantly less than the inventory in Midtown, but at the same time the desirability of Midtown South has increased greatly over Midtown. So those two factors have led to rapid absorption of all of the available space. Of course it didn’t hurt that Google moved into 111 Eighth Avenue and then ultimately bought the building. There are many, many companies that are in and around their headquarters at 111 Eighth Avenue, and they’re nearby because they need to be nearby.

Did you and other ABS executives know that Midtown South would boom before folks at other firms did?

In terms of knowing ahead of others, I think that was probably luck. In connection with all our real estate activities, we try to stay within fundamentals. And we’ve always liked the fundamentals of many of the buildings in Midtown South. They’re concrete and steel, heavy-duty construction, prewar, primarily 1920s construction, heavy floor loads, large window openings for excellent fenestration and access to mass transportation. It turned out that being on Union Square in particular is of great value at the moment, in part because of the L train and all of the young, creative and well-educated people that are living in Brooklyn. And so to commute from Brooklyn on the L train to Union Square—there’s no need to change trains. That’s a very interesting dynamic.

Can you explain ABS’ beginnings as a company in 1999?

I met Earle Altman at my first job, which was at Helmsley Spear. At the time, Helmsley was the largest real estate company in New York. And I applied for a job, and they accepted me. I don’t know what they could have been thinking. [Laughs] But they accepted me and they gave me a desk and a phone, which was the way things worked in those days. And they gave me a chance to see if I could learn the real estate business. And from the moment I met Earle, we became good friends and business partners. Earle taught me the business and over time we grew together to create ABS.

What does ABS stand for?

The other part of your company’s name is “partners.” How do you work with so many outside partners?

The philosophy that Harry Helmsley imbued in his team and his protégés was that you should invest along with your clients. So the philosophy of ABS initially was that we should invest with our clients. Over the years, that has worked very, very well for us. We have partners and clients who are interested in being passive investors, and we serve as the active investor, or the managing member.

Does ABS own properties or manage them?

ABS doesn’t own any real estate; it’s a service company. So ABS is a company that provides leasing, management and advisory work for our clients. The investments are made by the principals of the firm, along with our investment partners. And in some cases, ABS is the sponsor and ABS or the principals of ABS serve as the managing member. And in other cases, friends call and ask if we’d like to invest with them. And we’ve invested with a lot of capable real estate professionals and we’re very happy to call them partners. Over the years we’ve invested with Taconic, with Larry and William Ackman, with the Gotham Organization [run by] the Pickets, with the Hudson Companies and David Kramer, with Halpern [Real Estate Ventures] in a project that’s presently under construction at 311 East Houston Street.

Shifting gears for a minute, what attracted the ABS leadership team at the two-story retail building at 32-46 Steinway Street in Astoria, Queens, that you just purchased for $5 million?

As the density in Queens continues to increase, the activity on major thoroughfares like Steinway Street should only improve over time, particularly in cases where there’s access to mass transportation. So ideally our plan is to acquire 15 or 20 buildings over the next couple of years similar to the one that we just acquired today.