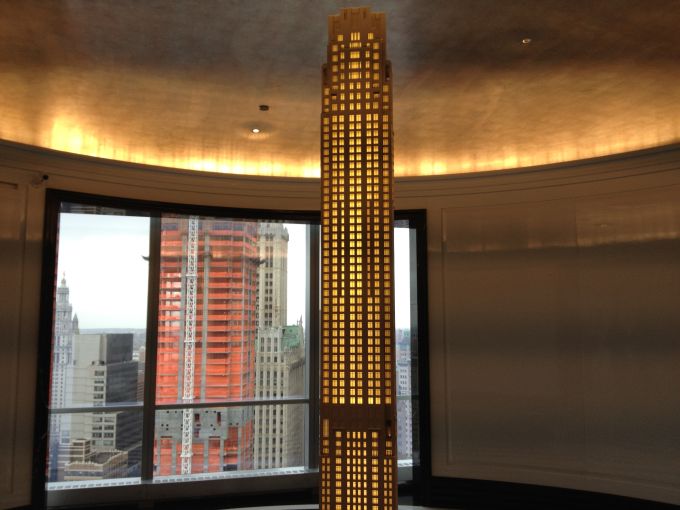 Click to enlarge: a model of 30 Park Place in view of the rising tower from 7 WTC. Tobias Salinger

Less than an hour after he left the stage at an event about the World Trade Center‘s progress ahead of the 9/11 anniversary, Silverstein Properties chairman Larry Silverstein invited reporters for a look at the Four Seasons hotel and condo development that’s rising just two blocks away from the trade center complex at 30 Park Place.

The 926-foot Robert A.M. Stern-designed building will feature 189 hotel rooms on the first 39 floors and 157 luxury condos leading up to the 82nd floor, including 11 penthouses with outdoor terraces starting on the 75th floor, when it opens in early 2016, according to Silverstein.

“What you’ve got is a very significant high-rise residential tower,” Mr. Silverstein told reporters in a showcase room on the 33rd floor of 7 WTC in view of the nearby ascending hotel and residential development. “You’ve got the combination of condominiums and the Four Seasons. By virtue of having them together, you have the ability as a condominium resident of being able to call down to the Four Seasons Hotel for anything that you need.”

Prices for the one to six bedroom condos run from around $3.1 million for a 1,108-square-foot one bedroom to $27.5 million for a 5,937-square-foot penthouse, according to the development’s website. Silverstein’s showroom plays an informal video with Messrs. Silverstein and Stern talking about the building that will also contain a ground-floor high-end restaurant in a short video with “Larry and Bob,” as the clip refers to them, rhapsodizing about New York City architecture and the plans for the structure.

“I think it’s a superb design,” Mr. Silverstein said. “Notwithstanding the fact there are many architects that are available for this type of building, there are few architects who understand luxury like Bob Stern.”