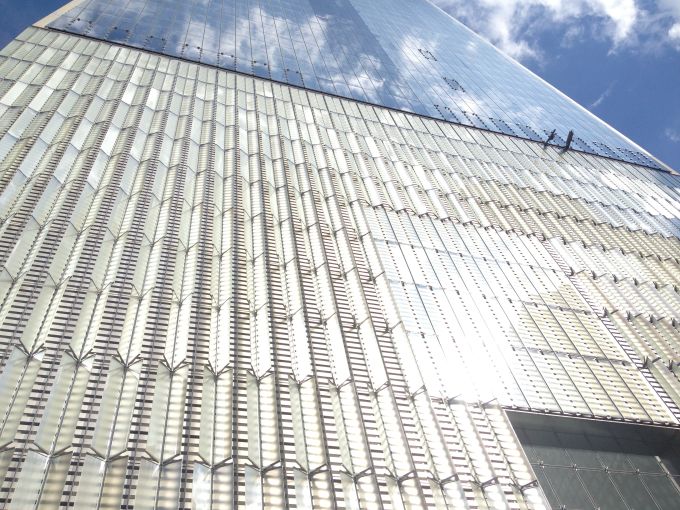 The base of the building is made of 2,000 panels of shimmering, prismatic glass. Tobias Salinger

Cushman & Wakefield, the exclusive leasing brokers for One World Trade Center, opened a downtown headquarters Monday through a 10-year, 10,222-square-foot lease on the 45th floor of 1 WTC, the firm announced yesterday.

The firm that maintains its global headquarters in Midtown now boasts an office footprint in space with asking rents of $69 per square foot that the company also markets on behalf of the Port Authority of New York and New Jersey and the Durst Organization.

“We are thrilled to have Cushman & Wakefield’s downtown office located at One World Trade Center, and extremely proud to take part in the renaissance of Lower Manhattan by establishing operations in this globally recognized, iconic property,” said Ron Lo Russo, C&W’s president of the New York Tri-State Region, in a prepared statement.

Mr. Lo Russo represented C&W in the negotiations, while Eric Engelhardt, Durst’s vice president and director of leasing, and Tara Stacom, the leader of C&W’s leasing team at 1 WTC, negotiated on behalf of the landlords. The 1,776-foot Port Authority-owned structure where Durst purchased a $100 million joint stake in 2010 has now leased 58 percent of its 3 million square feet ahead of its opening later this year.

“One World Trade Center and Cushman & Wakefield are an excellent fit because both carry brands that resonate around the globe,” said Jonathan “Jody” Durst, president of the Durst Organization, in a prepared statement. “Cushman & Wakefield is a world-renowned real estate company taking space at the world’s premier business address.”

The news arrives on the heels of a new 34,775-square-foot lease to Australia-based office space provider Servcorp, as Commercial Observer previously reported. Anchor tenant Condé Nast has nearly completed its 1.2 million-square-foot build out on floors 20 through 44 and the C&W lease highlights the building’s appeal, said Beth Wolfowitz, the Port Authority’s director of WTC redevelopment.

“This transaction with Cushman & Wakefield underscores the diversity of tenants, both domestic and international, who seek office space at One World Trade Center,” said Ms. Wolfowitz in a prepared statement. “One WTC is attracting world-class tenants who appreciate its proximity to exceptional public transit, retail shops and restaurants that are part of the revitalized Lower Manhattan.”