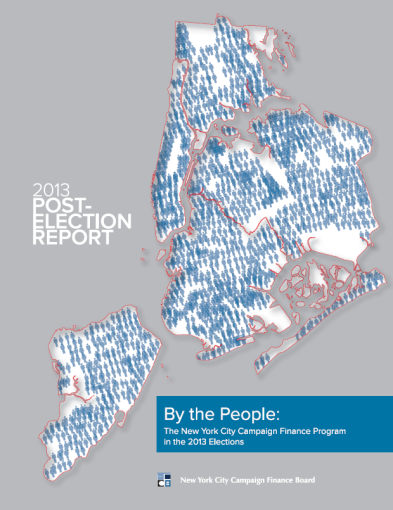 The New York City Campaign Finance Board decried the influence of the real estate industry-backed entity Jobs for New York during the 2013 election in the review of last year’s campaign the agency released Tuesday.

While the board’s regular review of city elections pointed out several City Council races in which the financial clout of Jobs for New York failed to deliver its preferred candidates to victory, the report calls for greater transparency of the contributors whose largesse allowed the Super PAC-like entity that wasn’t connected to any candidate to raise $6.9 million and spend $4.9 million on last year’s City Council elections.

“At the City Council level, spending by Jobs for New York exceeded the candidate spending limit in 15 districts during the primary election,” the report says. “Even those who predicted that Citizens United would lead to a deluge of new spending were surprised at the scope of these efforts.”

Representatives for Brookfield, Fisher Brothers, Durst, SL Green and the Real Estate Board of New York declined to comment, while officials at Tishman Speyer, Related, Glenwood, Jack Resnick, Rudin, and Silverstein didn’t respond to a request for comment.

But the report by the board, which distributed a total of $11.3 million to 129 Council candidates who participated in the city’s public financing program, places those donations in a larger context.

“Funded by the real estate industry, Jobs for New York alone accounted for 78 percent of the independent spending in City Council races,” the report says. “The group concentrated much of its spending on 16 open seats, spending an average of $251,000 to support candidates in those races. In the six races where it supported an incumbent, the group spent an average of $149,000. A number of candidates who benefitted from spending by Jobs for New York publicly denounced its support, disowned its attacks on their opponents, and questioned its effectiveness in their races.”

The City Council and Mayor Bill de Blasio passed a campaign finance law last week that places new requirements on such independent expenditures, stipulating that communications like mailers and campaign ads must include information on the top three entities and names of executives that funded them and mandating greater disclosure from independent spenders with the board. The law, which REBNY opposed, will order independent groups like Jobs for New York to supply the overarching company names of its donors rather than employing names of subsidiaries controlled by the companies.

“While public sources exist that allow voters to identify the true sources of these funds, discovering them requires significant research,” the report says. “The name of the outside group can obscure the true source of the funds. Without a more prominent disclaimer containing more information about the spender, voters may have trouble distinguishing independently-funded communications from those sent by campaigns.”

The legislative changes from last week mirror recommendations the board made in its report, which also looks similar to research and proposals relating to Jobs for New York that good government organizations like Common Cause New York circulated last year, said Susan Lerner, the group’s executive director.

“We’re working from the same database and we’re asking the same questions, so I would hope we would come to the same conclusions; and we did,” said Ms. Lerner. She added of the new law, “We were very pleased to see it passed and we do think it’s going to make a difference.”