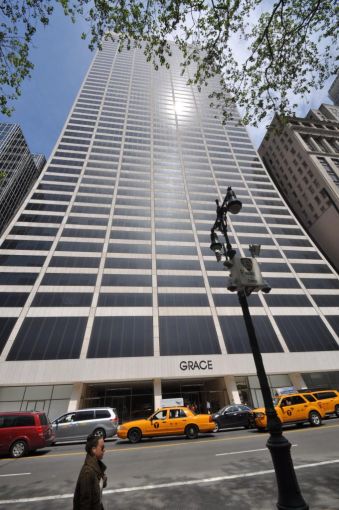 Bluestone Lane Coffee will open its fourth location by the end of the year in a 600-square-foot cafe space on the ground floor of the 43rd Street side of the Swig Company and Brookfield Properties‘ Grace Building at 1114 Avenue of the Americas, RKF announced Tuesday.

The Melbourne, Australia-inspired espresso and food hub will start operations shortly before chef Gabriel Kreuther and the Teton Restaurant Group inaugurate the chef’s French restaurant scheduled to open doors next year on the Bryant Park side of the building in a two-floor, 15,000-square-foot location. And the coffee shop and cafe should be able to tap into the neighborhoods bustling foot traffic, said RKF managing director Jon Krieger.

“As the park continues to develop into a Midtown hub, office tenants as well are attracted to the Bryant Park corridor, making this a great location for Bluestone Lane to capitalize on the growing office population, a key demographic for the brand,” Mr. Krieger said in a prepared statement.

Mr. Krieger represented Bluestone Lane in the negotiations, while Mark Kostic and Ed Hogan of Brookfield represented the landlord.

“There wasn’t a shortage of interest in this space,” said Mr. Hogan, Brookfield’s director of retail leasing. “For us, with our retail, we always look for best in class, something unique and unusual.”

The chef’s restaurant next to the park, whose name has yet to be released, will serve Alsatian cuisine in an interior designed by Glen & Company. Mr. Kreuther, a James Beard award winner who was formerly the executive chef at The Modern restaurant, will live up to his reputation in the chef’s first solo restaurant, Mr. Hogan said.

“It’s a beautiful design, a breathtaking design,” he said. “He’s such an amazing chef. He did such a great job at The Modern and I think this is going to be one of the best restaurants in New York City.”

Mr. Hogan also represented the landlord in the chef’s lease, while Spencer Levy and Michael Yohai of RKF negotiated on behalf of the tenant. Neither RKF nor Brookfield disclosed asking or taking rents at the building where three retail spaces are currently available, but asking rents in the neighborhood average $2,407 per square foot, according to the most recent seasonal retail report from the Real Estate Board of New York.