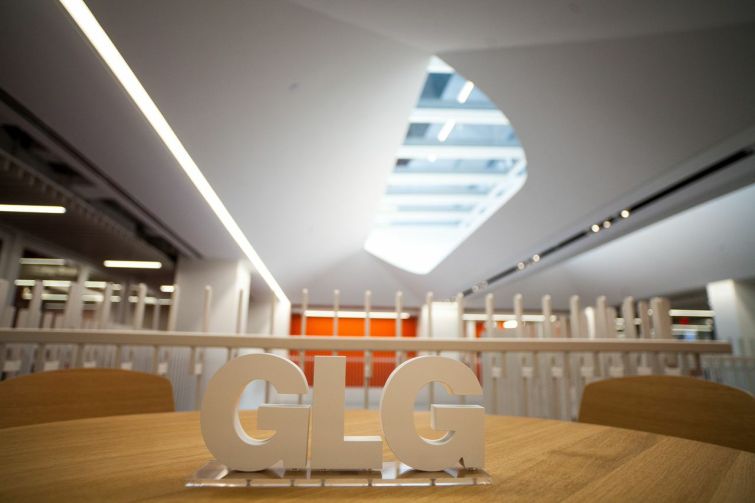 The company's headquarters next to Grand Central Terminal Tobias Salinger

Since GLG moved into its two-floor, 64,000-square-foot office at 60 East 42nd Street early last month, the 245 employees in the one-on-one professional learning firm’s New York City headquarters have enjoyed an office with a full-service barista bar, 33 conference rooms named after historical figures and a ping pong table for active five-minute breaks. Dennis O’Brien, the firm’s vice president of IT and office operations, and Richard Socarides, its head of public affairs, called from one of the office’s sound-sealed conference call rooms to dish on the space designed by Clive Wilkinson Architects. “People walk around smiling,” Mr. Socarides said of the staff’s reaction to their new digs near Grand Central. “For us, the experience has been amazing because it shows us how much the physical environment can transform the work experience.”

The open and clear floor plan allows for views all the way across the building and funnels all employees through common areas that allow people who have never seen each other before at the company to become acquainted. Employees work from easy chairs, tables and rotating workstations rather than personal cubicles that were once office staples. “Since it’s an open work plan, an activity-based office, nobody has an assigned seat,” Mr. O’Brien said. “Everyone’s able to be mobile.”

A central atrium is set off by stairs and an overhead skylight leads into a handmade brass bar where employees can place their coffee orders via a company-designed mobile app. The space isn’t just for coffee breaks; employees gathered around big screens during the World Cup to watch the games. “We also staff that bar with our tech support team,” Mr. O’Brien said. “So at one end of the bar, we have a barista and at the other we have our tech team.”

The big-screen televisions, news tickers and ping-pong table may appear to be distractions, but such amenities actually foster getting work done, Mr. Socarides said. “The big idea behind the office is to create an environment where you can actually work in cool spaces.”

The space’s 33 conference rooms with names like “Maimonides,” “Gandhi” and “Roosevelt,” 13 other conference call phone pods and a 75-person event area have revolutionized the company’s office. “That’s been a major weight off our employees’ shoulders,” Mr. O’Brien said of the conference rooms. “That was a constant struggle in our former office.”