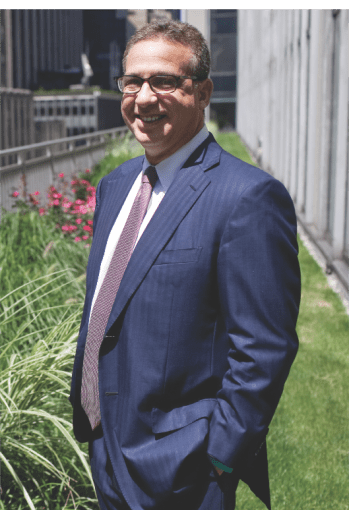 Mr. Kuriloff: With my partner Bruce Mosler, we represent Vornado for this asset, 1290 [Avenue of the Americas]. A large transaction we just closed about 60, 90 days ago—the Neuberger Berman headquarters relocation from Third Avenue to [Avenue of the Americas]—was exciting because Vornado knows how to re-position an asset better than anyone. We brought to the table the idea of building an entire model floor which would bring the vision to the end users. You know you’re successful when you’re on the tour with the Neuberger partners, and they looked at us and said, “Gee, this looks like a new building.” Then you know that the repositioning strategy you executed worked. We’ve leased over a million square feet in this building in the last 24 months.

You’ve represented several government entities and nonprofits. What’s the difference between negotiating on behalf of for-profit companies and public or nonprofit entities?

The reality is there is no difference. And the reason there’s no difference is whether it’s what we refer to as a 501(c)(3), which is a nonprofit organization, or a publicly traded company, there’s pressure of being efficient, the financial pressure of reducing operating expenses. As you know, real estate is the second-most expensive cost an organization—for-profit or not-for-profit—has after its people. So looking at sizing, looking at increasing productivity for the work staff, looking at abilities to recruit or retain talent, are all drivers that both a for-profit and a nonprofit look to achieve.

We currently represent the MTA, with its New York portfolio. We’ve leased about 500,000 square feet. And when I say we, we includes a lot of people at Cushman & Wakefield, a lot of teams. The key to what we do to be successful is the integration and collaboration of a diverse group of talents. And when you put that all together, the objective is one plus one equals three for our clients.

In addition, we do a lot of healthcare work. We represented NYU Langone [Medical Center]. We represented Continuum [Health Care] before they merged with Mt. Sinai Hospital. I want to be clear when I say that we represented them not on their hospital function or on their medical functions, but strictly looking at their administration. Like for-profit companies, they’re looking for ways to right-size, they’re looking for ways to consolidate.

Aren’t there some financial limitations with your government clients?

I can answer that in a very direct way. The lowest cost alternative is what the MTA focuses on. With a caveat, no pun intended, it needs close proximity to public transportation. What we’ve been able to do with the MTA is get a real estate tax exemption for them. And therefore, they don’t pay real estate taxes; it gets netted out of the gross rent. Imagine the rent coming down per annum over 20 years, by $8 to $10 per square foot—significant savings.

We just closed a big lease at 420 Lex[ington Avenue], the Graybar Building. And I will share with you that there’s a lot of scrutiny that goes into the MTA. Major leases get reviewed by the State Attorney General’s office, as well as the [State] Comptroller’s office. So our due diligence, dotting i’s and crossing t’s, and having a complete file of the process we went through, why we selected a strategy and how we executed upon that strategy, is full documentation, full transparency.

Please describe your work on behalf of another client that’s been in the news a lot lately: Verizon.

Verizon has been keenly focused on right-sizing its portfolio for the 21st century, and going through a transformation of the workplace to be innovative and forward-thinking. They also, as you read about in the papers, have been looking at a global strategy to monetize any underutilized real estate assets. So last year with our capital markets teams, our investment banking teams, we were retained by Verizon first to do a study on 140 West Street, which has some great architectural integrity. And the study was what’s the highest and best use of the real estate—should it be a hotel or residential condominium or maintained as an office building? And we went through that detailed in-depth study and based on supply-demand studies we concluded that there is a huge demand for residential condominiums in New York.

How is the market changing with the emergence of millennials in the workplace?

I love studying what’s going on with the millennials. And the reason that I love studying the millennials is that age demographic is as large as the baby boomers. I’m a baby boomer; my children are millennials. They are the consumer of the future, whether it’s real estate, automobiles or food. And you think about their lifestyle, how they grew up a little differently than I did: socially connected, with technology, multitasking. They’re foodies—you know gluten-free, healthy food. They’re into sustainability. So Cushman & Wakefield is evaluating what is the future of how companies will look to operate and run their businesses with a very keen eye toward what will become a war for talent.

What’s driving all of this is the growth of urbanism. It [once] was all about suburban markets, sprawl. It was about people like myself wanting to leave Manhattan and have a big backyard, a place for my children to ride their bicycles and get a good education and have less crime. Cities today are safe, safer than they’ve ever been. It’s where the intellectual capital is. Here’s a very interesting statistic I just read the other day: the higher the education of a workforce within a city, the higher the GDP of that city. And that’s what New York is; it’s one of those gateway cities.

But how about another one of those large cities: Chicago? How did you convince U.S. Equities Asset Management to change the name of Sears Tower to Willis Tower in 2009?

It was very interesting. We represent Willis [Group] on a national basis and one of their strategies was to embark on a branding strategy wherever we leased space on their behalf, whether it was a big office or a small office. Our requirement was about 150,000 square feet and Sears Tower is 4 million square feet. So we kind of thought to ourselves, “It’s going to be very tough to get a branding opportunity since the building’s already named Sears Tower. We’re going to be a relatively small tenant in this 4-million-square-foot complex.” So we were in the lobby, and we were meeting the landlord and their representative. And I said, “This asset won’t work for Willis because we’re looking for branding opportunities. We don’t want to be a small tenant in a large complex.” And I said, “Unless you want to rename the building to Willis Tower. Then we’d be interested.”

And I’ll be authentic when I tell you that I was kind of half-joking when I said that. But the developer said, “You know, it’s interesting. We actually have been exploring that.” Sears had located out of the building to the suburbs a few years prior to that. I went on to say, “Well if you would at all consider renaming this asset, we would be interested.” So the conversation started. We planted a seed.

What neighborhood did you grow up in and how has being the son of two art teachers influenced your career?

I grew up in Jackson Heights, Queens. My father had a little studio in that area. In fact, I brought my son the other day to see where I grew up.  I took [both my children] when they were younger. I shared a bedroom with my brother; we didn’t grow up affluent. I grew up with the creativity, being in galleries and museums constantly and it was more for developing, I want to say, an eye. I don’t have the gene to draw. But I have a great eye, where I can see things, and I try to bring that to our Cushman & Wakefield clients.