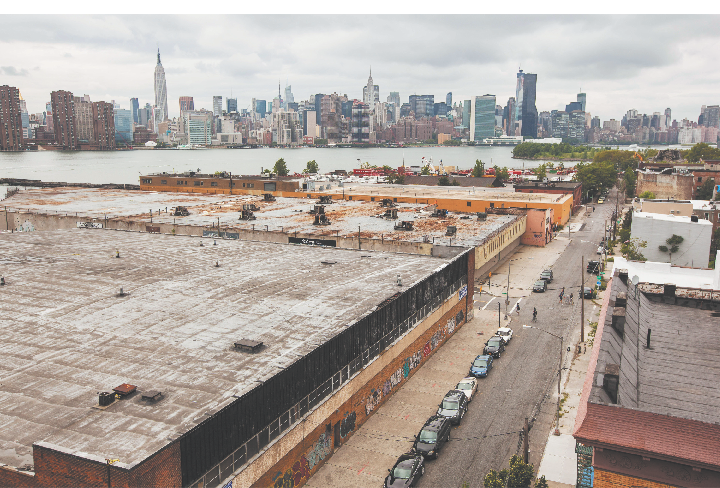 Greenpoint may not be as sleek as Williamsburg, and the neighborhood is still a (diminished) Polish stronghold, but it’s gaining more attention now as residential developments, many stalled during the recession, prepare to dot the still-scrappy waterfront.

“It’s just a matter of evolution,” said Ofer Cohen, the founder and president of Brooklyn commercial brokerage TerraCRG, during a tour of Brooklyn’s northernmost neighborhood. He was referring to how Greenpoint would naturally follow in the gentrified footsteps of Williamsburg, its more developed neighbor to the south. “Now that Williamsburg is done in terms of large-scale development, Greenpoint is next,” Mr. Cohen said.

He and colleague Peter Matheos escorted Commercial Observer around the area last week in Mr. Cohen’s BMW X5. They pointed out existing developments and those in the pipeline along the waterfront.

There are a myriad of them, most with a retail component at the base of the buildings.

“Everything that’s coming is residential and retail,” said SCG Retail’s Geoff Bailey. “That’s what led the charge in Williamsburg.”

As the two projects that will dominate the Newtown Creek/East River waterfront, they engendered a great deal of community opposition to their height and density.

While the general shapes of the buildings were approved in 2005, the City Council voted in favor of key aspects of Greenpoint Landing—additional affordable housing, a public elementary school and open space—last December. That month, the City Council also greenlit 77 Commercial Street, with its two 30-story buildings.

Johanna Greenbaum, a vice president of Greenpoint Landing Associates, added: “We were invested in the neighborhood. We’ve been part of [it] for a very long time. We bought [the property] before 2005. I think there was a real belief in north Brooklyn before this current wave of interest.”

All of the activity in Greenpoint makes the low-slung ethnic (and cool kid) enclave resemble the late-’00s Williamsburg.

Polish emigration to the Greenpoint waterfront started around 1850, and that population stayed there for nearly a century, according to The Sixth Borough blog. Meanwhile, industry on the Brooklyn waterfront gave way to the rise of container ships before deindustrialization made room in north Brooklyn for a flood of artists in the 1990s. (Demographic changes aside, Polish butchers and pierogi joints abound to this day.)

While Greenpoint has seen less hype than Williamsburg, the neighborhood gained some pop culture cred as the setting of the HBO series Girls, which first aired in 2012.

“The residential up in this market, it’s a direct parallel to Williamsburg, where you had this industrial waterfront that was rezoned [in 2005] and the residential density … led the retail to come in behind it,” said Mr. Bailey, who is co-marketing the 8,000-square-foot retail space at 1133 Manhattan Avenue, Domain Companies’ 210-unit residential project a few blocks off the waterfront.

While 1133 Manhattan Avenue is more a part of industrial Greenpoint, it “will feed off of the waterfront in time,” said David Maundrell, the founder and president of Brooklyn real estate firm aptsandlofts.com.

While developers have been chomping at the bit since Mayor Michael Bloomberg’s 2005 rezoning of nearly 200 industrial blocks in Greenpoint and Williamsburg, the recession stymied much of the development. One broker noted that developers have been back on track since last year.

Mr. Maundrell, who grew up in the area, said the Greenpoint waterfront looks the same as when he was a kid, but it’s “safer” with fewer “burnt out cars, less bodies. Before you could sneak around and have keg parties.”

Andrew Till, the vice president of asset management for Meadow Partners, said the company’s 130-unit 110 Green Street benefits from being closer than waterfront properties to the G train’s Greenpoint Avenue station. He added that since it sits between Manhattan Avenue, the main retail drag, and the hip boutiques and cocktail bars of Franklin Street, that residents have prime shopping access.

(Local G train service—the perennial bane of Greenpointers’ existences, is currently down for five weeks of repairs, an inconvenience that could auger infrastructure headaches to come with the new development.)

“I personally consider the waterfront a little more fringe,” Mr. Till said. In addition to subway inaccessibility, the waterfront clings to an industrial feel, which deters some affluent homebuyers even as it lures artsy types.

Mr. Till said there is room for retail growth—some say for the worse—in Greenpoint.

“Where there are apartment buildings, there are people who need prescriptions,” Mr. Till said. “I think [Manhattan Avenue is] going to change like everything else does. You’re going to see the Duane Reades. It’s inevitable.”

Dan Marks of TerraCRG put the retail rents along Manhattan Avenue between $65 and $80 per square foot. Mr. Bailey put the figure at $60 per foot.

Mr. Marks said the warehouses that have been converted into offices scattered throughout Greenpoint have rents starting at around $30 per square foot. But large office and commercial development has been scant.

“There’s not much office to speak of,” Mr. Bailey said.

That said, the crowdfunding tech startup Kickstarter moved its 80 employees to Greenpoint in January after buying 58 Kent Street, the former Eberhard Faber Pencil Factory, for $36 million. And Joshua Guttman’s glassy, 40,000-square-foot-plus Brooklyn Expo Center at 79 Franklin Street will open with a Sept. 12 antique and book expo.

One of the big players in the Greenpoint commercial real estate arena is Broadway Stages, one of New York’s largest full-service film, television and music production facilities. The company has 1.2 million square feet of space for studios, support functions, production, parking and offices throughout Greenpoint.

Gina Argento, a co-president of Broadway Stages with her brother Tony, said the company decided to move to Greenpoint 16 years ago because it could find big warehouse space. She and Mr. Argento also liked “that it was community-oriented.”

But will that neighborhood feel evaporate once the onslaught of new housing fills up as many contend it has in the new, glossy Williamsburg?

There’s been opposition in Greenpoint toward Greenpoint Landing and 77 Commercial Street, since between the two waterfront towers there will be more than 6,000 new residential units

“… to distraught residents… the giant ‘monstrosities’ showed ‘complete disregard’ for the neighborhood’s needs,” according to a DNAinfo article from May 2013. Other issues included “a lack of transportation, inadequate park space for the influx of people and the towers’ environmental impact.”

Ms. Argento, for one, who is working on moving to Greenpoint, has seen more families moving back to the neighborhood and is not concerned about a potential Duane Reade-ization.

“I’m not worried about the [residential] towers,” she said. “The families moving into Greenpoint want to maintain family businesses because that’s what attracted them to the area. If we lose that, I think we will lose a lot.”

Council Member Stephen Levin, who represents several Brooklyn neighborhoods including Greenpoint, where he lives, said it’s unfathomable at this point what Greenpoint will look like once all of the residential development is built.

Residents are still troubled by the 2005 rezoning and the development floodgate it opened, an issue that Mr. Levin said he ran on last year for his reelection.

“It was a massive rezoning,” Mr. Levin said. And “I don’t think it was a very good rezoning. I think it created way too much density on the water and did not accurately anticipate the value of commercial development in Brooklyn that’s been happening over the last couple of years.”

Despite some lingering doubts about the wisdom of the rezoned waterfront, retail there will inevitably follow once the new housing units are occupied.

“You need that density to support these retailers,” said Ryan Condren, the managing director of retail leasing at CPEX. “It’s an organic effect that takes time. Retail really follows the residential. Once the community gets denser the retail will continue to evolve.”