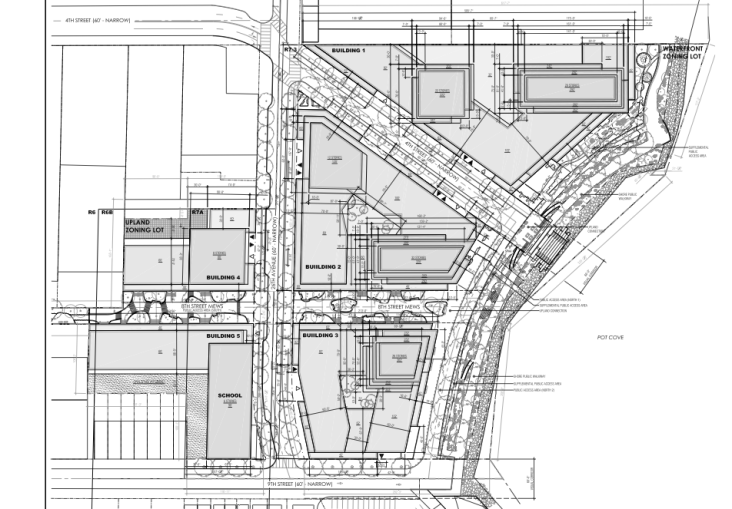 With much of the debate focused on the amount of affordable units on the property—currently at 345, or 20 percent of the units—the developers want to draw attention to their willingness to provide more transit infrastructure on the site that’s a 15 to 20-minute walk from the closest subway station as an example of their good-faith negotiations with elected officials and the local community.

“In line with the concerns expressed by Community Board 1 and the Borough President, the Astoria Cove design includes a location for a ferry terminal should the City decide to extend ferry service to the Hallets Point Peninsula,” said Howard Weiss, a partner with Davidoff Hutcher & Citron who is representing the developers, as part of a prepared statement he released after Queens Borough President Melinda Katz recommended disapproval of the project last week. He added, “In addition to the opportunity for ferry service, Astoria Cove will run shuttle buses to area subway stations and there have been discussions with the [Metropolitan] Transit Authority about increased bus service.”

It’s not clear whether these pledges will gain traction with the City Planning Commission and the City Council as the proposal winds its way through ULURP following its disapproval by both the Borough President and Community Board 1. But both advisory recommendations included calls for increased public transit options, including ferry service, and a boat route from the area around the project to parts of Manhattan would be far from the first such service on the peninsula. A new route connecting Astoria to Roosevelt Island, Long Island City, Midtown and Lower Manhattan would cost $2.7 million in annual subsidies and $23 million in capital costs, according to a 2013 study by the city Economic Development Corporation.

A representative for local Council Member Costa Constantinides, a Democrat who represents Astoria and parts of Woodside, East Elmhurst and Jackson Heights, declined to respond to the developer’s comments Monday. But the lawmaker—whose vote will likely determine that of his colleagues in the during the final up-or-down vote on the project in the Council—told Commercial Observer he’s “committed to bringing a ferry here” and called a route to Manhattan “the right thing for everyone involved” during a visit to the site last week.

The City Planning Commission will hold its public hearing on the proposal on Wednesday morning.