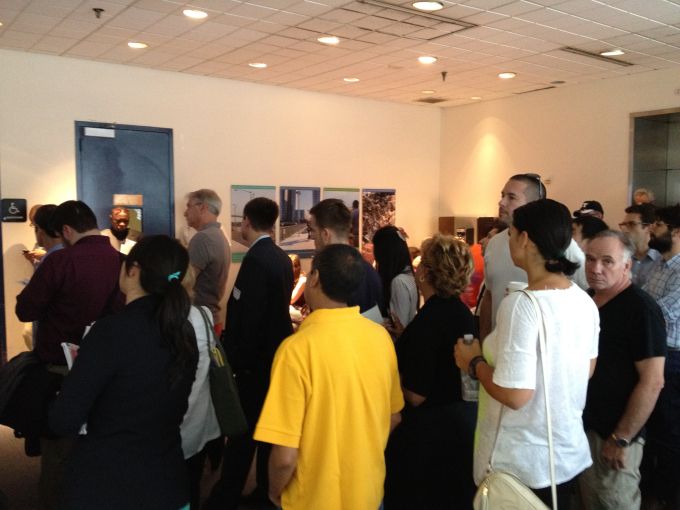 Spectators and participants crowded around an HD monitor showing the hearing at the Department of City Planning. Tobias Salinger

In a public hearing today on the packed ground floor of the Department of City Planning, representatives for an investor team that includes Long Island City-based Alma Realty Corp. faced a barrage of questions from the City Planning Commission as the commissioners consider the 2.2 million-square-foot, 1,723-unit Astoria Cove proposal on waterfront property overlooking Pot Cove.

The commissioners queried Howard Weiss of Davidoff Hutcher & Citron on the amount and pricing of the affordable units at the site and the potential use of the 456-student school site in the plan as a recreational area prior to the school’s construction as dozens of people lined up to testify over affordability, union concerns and public transportation as the commission considers its recommendations on the proposal during this phase of the area’s rezoning from a manufacturing district to a mixed-use residential area.“That conveys a lot of value to your client, so I think the things that we’re raising show a balance,” said Commissioner Michelle de la Uz during the question-and-answer time with Mr. Weiss which dozens of viewers both in the filled gallery of the hearing room and an overflow area with television monitors watched with rapt attention.

Mr. Weiss pledged to work with the commission on all their requests for the property that he said the developers have acquired in pieces over the past 30 years, referencing the proposal’s 83,846 square feet of new public open spaces on a waterfront esplanade and new streets approaching the water, as well as both the new school grounds the development team wants to donate to the city School Construction Authority and the disapproval recommendations by Community Board 1 and Queens Borough President Melinda Katz that he characterized as positive, on balance.

“Astoria Cove would be the crown jewel in the reclamation of the Queens waterfront,” Mr. Weiss told the commission. “It bears emphasis that the recommendations that you’ve received from the community board and the borough president do not object to the essential elements of this project.”

But both recommendations called for more affordable units at the project–a number that currently stands at 345, or 20 percent of the units–and many of the public participants in the hearing  pushed the development team on the level of affordable units. Jaron Benjamin, the executive director of the Metropolitan Council on Housing and a leader in a coalition of more than 50 advocacy organizations and unions called the “Real Affordability for All Coalition,” reiterated the coalition’s assistance that at least 50 percent of the apartment units be affordable.

“With nearly half of all city residents today living near the poverty line, anything less than 50 percent real affordability in new housing will fail to address the scope and severity of the growing inequality crisis,” Mr. Benjamin said in his testimony. “If Astoria Cove becomes just another glitzy playground for the wealthy elite, it will be a huge step backward–the opposite of progress.”

Mr. Benjamin and others have also drawn attention to the lack of information about the income levels the affordable units would serve, and Commissioner Angela Battaglia asked Mr. Weiss directly about the levels of affordability.

“In looking at this project over a 10-year phasing plan, one has to keep in mind that market conditions can change,” Mr. Weiss said. “At present, it’s really too early to determine what that mix will be.”

But commissioners did note that the developers are utilizing a city program that allows them to build higher in exchange for devoting 20 percent of the floor space to the affordable units without asking for any subsidy to do so.

“I just want to say that I appreciate that your client has been willing to work with the administration on the affordable housing,” said Ms. de la Uz. “I look at that as a significant step forward.”

On the other hand, the commissioners did question Mr. Weiss’s contention that the community board’s call for use of the school site as a recreational area before the school’s construction is not feasible due to the space’s planned use as a staging area for construction.

“It sounds to me like it’s not what you need, it’s what you want,” Commissioner Irwin Cantor told Mr. Weiss. “I don’t follow your line of reasoning.”

Mr. Weiss promised to explore the issue in talks with the commissioners in coming weeks.

Other members of the public spoke up over union concerns over Astoria Cove, with a group of workers showing up in large numbers under the auspices of a separate coalition called “Build Up NYC.” Those union members cited potential unsafe conditions due to hazardous materials on the long-used industrial sites and called for more concessions on the nature of the jobs on the development site.

“Building in Astoria Cove will generate hundreds of construction jobs and permanent maintenance and retail jobs,” said John Tritt of the Hotel Trades Council. “Alma Realty has an opportunity to create good, safe jobs with priority hiring for local residents and opportunities for local businesses, but hasn’t made a commitment to do so.”

Mr. Weiss referenced the developers’ willingness to work with building trades and service workers in his statement following the borough president’s disapproval of the proposal last week. That statement also included a commitment to provide a ferry terminal on the esplanade if the city decides to extend water-bound ferry service to the area that’s nearly a mile from the nearest subway. But Brian McCabe, the chief operating officer of New York Water Taxi called for them to go further.

“I strongly support the inclusion of ferry infrastructure and service as part of the rezoning of Astoria Cove and ask for your support to ensure that the developer includes this in the final plan,” Mr. McCabe said in his written testimony.

The commission will issue its recommendations by Sept. 29 on the project after its 60-day review period under the city’s Uniform Land Use Review Procedure. The proposal will then proceed to a final up-or-down vote in the City Council.