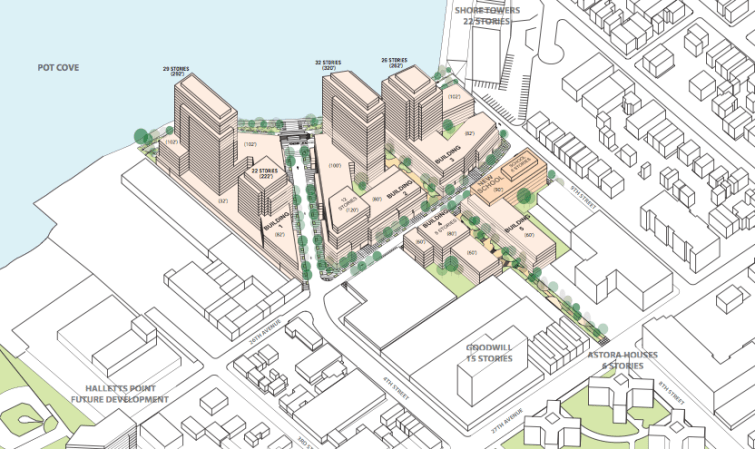 View of the heights of the proposed buildings. (Department of City Planning) Tobias Salinger

The Queens Beep recommended that a group of developers including Alma Realty Corp. should devote more of the complex’s 1,723 units to affordable housing, do more to address the lack of public transportation from the site overlooking Pot Cove and pay prevailing wage to construction workers on the property, along with living wage for permanent employees.

“The proposed redevelopment of the Astoria Cove site would revitalize an otherwise underutilized Queens waterfront,” Ms. Katz told the Queens Courier. But, she added, “At this time, there are still outstanding issues with this project which must be meaningfully addressed by whichever entity implements and constructs this proposed project in the future.”

Davidoff Hutcher & Citron‘s Howard Weiss, a lawyer for the developers, expressed disappointment with the disapproval recommendation but said the development team is “pleased” that Ms. Katz didn’t object to the overall idea of the proposal.

“We remain confident that the City Planning Commission and City Council will recognize that Astoria Cove will be the crown jewel in the revitalization of the Queens waterfront with its promise for the Astoria community of much needed housing, local retail with a FRESH supermarket, construction jobs and permanent employment, and waterfront access with expansive publicly accessible open space,” Mr. Weiss said in a prepared statement.

But local Council Member Costa Constantinides, a Democrat who represents Astoria and parts of Woodside, East Elmhurst and Jackson Heights, responded with his own statement that his influential vote in the final determination phase of the city’s Uniform Land Use Review Procedure would hinge on issues raised by the twin advisory disapprovals of the project by the Beep and Community Board 1.

“If the development is not integrated into our neighborhood in a way that benefits the community, I will be unable to support it,” Mr. Constantinides said. “This means providing ample affordable housing, good jobs both during and after the construction process, and dramatically increasing public transportation options on and off of the peninsula.”