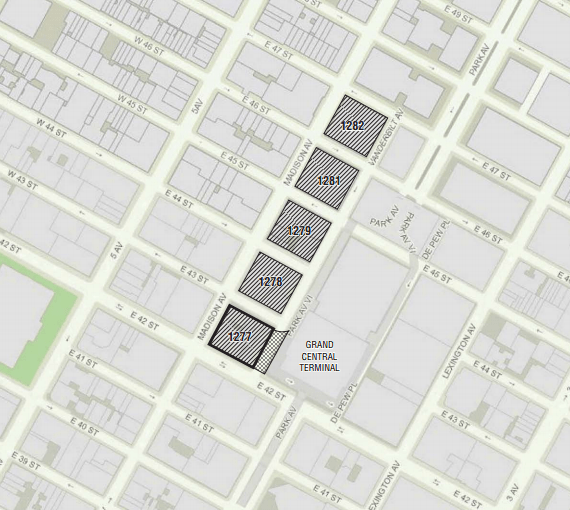 1 Vanderbilt and the Vanderbilt Corridor. (Department of City Planning)

The landlord of Grand Central Terminal sent two lawyers to a preliminary Department of City Planning hearing on SL Green Realty Corp.’s proposal for One Vanderbilt to communicate the strong objections of Argent Ventures and its two private partners to the current plans for the 1,350-foot Midtown East office tower.

Sparks flew at a public meeting today about the pending environmental impact statement on the 67-story structure that would rise at 317 Madison Avenue adjacent to Grand Central, with litigation attorney Duane Loft of Boies, Schiller & Flexner offering up a threat to slap the city with a $1 billion lawsuit over the terminal’s unused air rights.

“As we see it, the proposal would cause an unconstitutional taking of our client’s property,” Mr. Loft said in testimony before DCP’s Environmental Assessment and Review Division. “The development rights above Grand Central are property rights, and the Constitution protects those rights from being taken from their owners without just compensation.”

The gambit played out as the latest action in Argent Ventures President Andrew Penson’s continuing fight to get the city to facilitate purchases of the historic terminal’s unused air rights over the $250 per square foot asking price that came out during last year’s failed rezoning plan, which included the five blocks under consideration in SL Green’s current proposal.

The Vanderbilt Corridor proposal would allow SL Green to build the tower without purchasing any of Argent’s 1.3 million square feet of air rights, said the firm’s land use attorney, Paul Selver of Kramer Levin Naftalis & Frankel.

“Transferable development rights are a time-tested method for the city to preserve important resources while respecting Constitutionally-protected property rights and ensuring the appropriate development of a neighborhood,” Mr. Selver wrote in testimony he submitted to the agency. “The proposed amendments depart from this approach to zoning, and interpose the city between Grand Central Terminal and potential development rights purchasers.”

SL Green agreed to build public spaces and transportation improvements in order to build 672 feet over current zoning scale in the “draft scope” document that’s a preliminary guide to the environmental review of the proposal required under the city’s Uniform Land Use Review Procedure.

The landlord’s lawyer, Richard Leland of Fried, Frank, Harris, Shriver & Jacobson, declined to comment on the Grand Central team’s claims after the hearing, but SL Green officials followed up with a statement citing “broad stakeholder support from important city advocacy groups” for the One Vanderbilt proposal.

“We look forward to continuing an open, receptive dialogue as we create a world-class office tower with $200 million in transit and public realm improvements,” said Robert Schiffer, the company’s managing director.

Representatives for the Real Estate Board of New York, 32BJ SEIU, the Straphangers Campaign, the Association for a Better New York and the Grand Central Partnership spoke in favor of the two-pronged proposal, which would give SL Green the go ahead to build its 1.8-million-square-foot tower and offer future applicants along the five-block radius the ability to build above current zoning rules in exchange for either purchasing air rights or implementing public improvements.

“This does not preclude the ability of the owner of Grand Central’s transferable development rights to sell them,” Ms. Raynoff added in an email. “Moreover, this ability would not just be preserved, but expanded under the proposed framework.”

Update: This story has been updated to include a follow-up exchange with the Department of City Planning and a statement from SL Green.