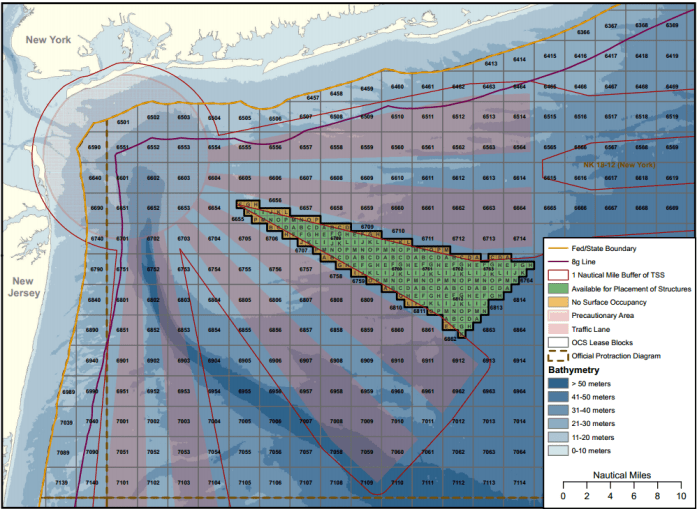 The U.S. Bureau of Ocean Energy Management is conducting a preliminary environmental assessment and a call for commercial expressions of interest on wind energy leases in an 81,130-acre site that’s roughly 13 nautical miles off Rockaway Peninsula.

After the state’s New York Power Authority submitted a 2011 wind proposal for 194 turbines on the site to the agency in conjunction with the Long Island Power Authority and Con Edison, the federal agency that oversees offshore energy production launched the lengthy public review and competitive bidding processes President Barack Obama outlined in 2010 in response to the Deepwater Horizon oil spill, and the agency announced in May that it’s accepting notifications from other interested parties ahead of a potential lease auction.

“The call [for bids] is an important step in planning for wind offshore New York,” said BOEM Acting Director Walter Cruickshank in a prepared statement. “After the completion of the necessary environmental reviews, consideration of the existing uses of the area, and consideration of feedback from the New York Intergovernmental Renewable Energy Task Force and the public, BOEM will decide whether to publish a proposed sale notice to describe the area to be offered and the proposed terms and conditions of wind energy leases.”

The agency’s effort represents serious steps toward proposals like New York Power Authority’s plans to create 350 megawatts of electricity, an action equivalent to removing 120,000 cars from the road, according to NYPA, after a 2005 law that opened the outer continental shelf on the ocean floor off the New York coast to possible leasing for renewable energy purposes. But the agency will first have to judge the environmental impact of leasing the area, oversee applying companies’ biological and geological surveys of the site that has waters between 60 to 120-feet deep, collect alternate expressions of interest from private firms and assess public comments it has received. The state agency expressed support for the thorough federal procedures.

“The New York Power Authority believes an offshore wind project is the best use for the site, as it will help New York State and the City of New York reach their low-carbon, clean and renewable energy goals,” said NYPA spokeswoman Connie M. Cullen in a prepared statement. “Numerous letters of support for the offshore wind project at this site have been received from environmental, academic and government entities. Further study by the appropriate regulatory agencies reviewing uses and other issues, including navigational safety and compatibility, will help determine how the site can best serve the energy and environmental needs of the region.  We respect the federal processes in place to ensure all considerations are carefully evaluated.”

BOEM started public comment periods on potential lease auctions for 344,000 acres off the New Jersey coast last week, and expects to hold auctions for areas off Maryland and Massachusetts later this year. So far, competitive lease sales for spaces off Virginia, Rhode Island and other parts of Massachusetts have yielded $5.4 million in bids for 277,550 acres of space in federal waters. The $415 million NYPA project would start commercial operation no earlier than 2017, according to its website.

Update: This story has been updated to distinguish between NYPA plans and those of other prospective bidders, as well as between a particular 2010 executive order and the Obama Administration’s response to the Deepwater Horizon spill.