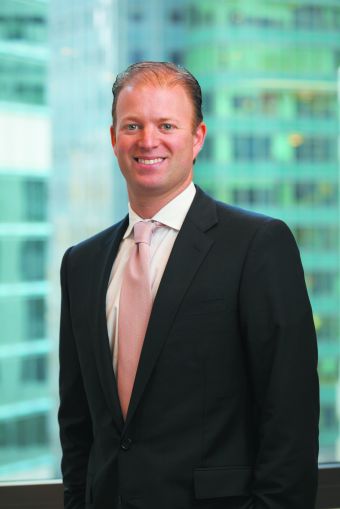 Mr. Schonbraun told Mortgage Observer about his tennis career, SL Green’s entry into lending and how New York City has more available debt and equity than perhaps any other time in history.

Mortgage Observer: I know you were an avid tennis player growing up. Did you plan to play professionally?

David Schonbraun: That was the initial plan. I got hurt, tried to come back – it was tough. But it’s probably the best thing that ever happened to me, actually. Tennis got me into Princeton. In retrospect, I probably would have played tennis for a couple years and I would have started at a less opportune time in the market cycle.

How did you make the transition into real estate?

I grew up around real estate. My dad had a consulting and accounting practice. Real estate was discussed at the dinner table. Princeton didn’t have a real estate program, but I actually wrote my thesis on REITs. Then I did a couple years of investment banking after college at Credit Suisse. But I wanted to be on the principal side rather than the advisory side.

How has SL Green changed since you joined in 2002?

At the time it was probably around five percent of the size it is today. It was about a billion-dollar company. We were just evolving into buying Class A buildings—away from the old side-street model of buying B buildings and renovating them. We had just started in the debt business. I got a front row seat in the company’s evolution.

SL Green is known mostly as an office landlord. When did lending become a part of your business?

Marc [Holliday] and Andrew [Mathias] had lending backgrounds. To be able to lend you have to know what to do when something goes wrong. To be a good steward of capital, you can’t just lend money and hope everything works out. The initial focus was on office properties. The debt platform has grown and evolved, like the rest of the equity platform, into retail and multifamily.

Do you remember your first financing deal?

I think the first debt deal I worked on was a $15 million mezzanine loan for Jeff Sutton at 609 Fifth Avenue. Jeff’s been a great partner. We started out lending to Jeff, and now we’re equity partners. I think we work well together – he focuses more on the leasing aspect and we focus more on the acquisition side.

What are your responsibilities these days?

One, I run our debt business. Right now we have about $1.5 billion in loans that we hold on our balance sheet. It’s a combination of bridge loans, mortgages, b-loans, mezzanine loans and preferred equity. I’m also responsible for our special servicing business. On the equity side, I’m responsible for our multifamily platform and corporate transactions.

What’s the current state of the commercial lending market? Construction lending in the city?

Traditional banks were maybe 50 percent of the market when it just came back, but now they’re at maybe over 60 percent. Early last cycle, we were buying a lot of distressed debt. Later, we did more subordinate capital. The best way to maintain our yields is to control the entire debt stack. Regarding construction financing, SL Green has done some bridge loans on land with some element of pre-construction and foundation fundings. But there has been a relatively low amount of New York City office development in recent years.

Who are your main borrowers?

We have a lot of repeat borrowers. A lot of them would seem to be natural competitors: The Blackstone Group, RXR Realty, Thor Equities. But people have accepted that we run a separate debt and equity business. We sometimes help borrowers negotiate leases–it’s a value add that we can provide as a lender.

One of your biggest deals was last year’s $925 million loan for the Sony Building, which was purchased by Joseph Chetrit.

That was a deal that we had already underwritten, because we had considered buying the building first, so we were already comfortable with the building. It was a very complicated deal, but I think [the buyer] had confidence in us. We worked through a bunch of relationships we had to syndicate pieces of the debt stack, and we held a subordinate piece of the debt.

Has SL Green done any deals outside of New York?

Our book right now is 100 percent in New York. We’ve opportunistically gone outside of New York on two deals. One was a loan on a building in London. We bought a discounted note purchase on a building net leased to Goldman Sachs. We ended up resolving that deal with 20 percent internal rate of return, but we felt we could redeploy capital better in New York.

What was the other deal outside of New York?

That was the Arden Portfolio in Southern California, where we bought a senior mezzanine loan near the peak of the market. A lot of sponsors were involved, including Hines and Calpers. That deal became overleveraged; it kind of spiraled pretty badly. We ended up cleaning out the entire capital stack, taking over the property and bringing in Blackstone. It was a two to three year process. This March, we ended up selling out of that position to Blackstone. We made money. It was a deal that didn’t go as planned, but…we were able to turn it into a double-digit return.

Do you expect any more distressed property opportunities?

Where pricing is in New York, there is no distress. [The city] is flush with capital – I’d say almost endless debt and capital. You’re seeing a strong New York City job market, which is helping the office market. If anything, New York is almost as good as it’s ever been.