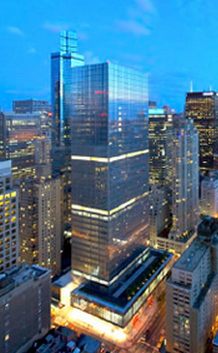 Morrison & Foerster will be the first tenant to move in at 250 West 55th Street, according to an email to clients viewed by Commercial Observer. The law firm will officially relocate from 1290 Avenue of the Americas on Monday.

The move comes nearly three years after Morrison & Foerster first signed a lease at Boston Properties’ new tower. The firm’s initial 15-year commitment for 180,000 square feet of space on the 17th through 23rd floors allowed the developer to proceed with construction of the tower, which had been delayed during the recession. Approximately a year later, Morrison & Foerster signed a lease for an additional floor at the building.

Morrison & Foerster will later be joined in the building by fellow law firm Kaye Scholar and a handful of financial services tenants, including Soros Fund Management, Modern Bank and Platinum Partners.

As reported by Commercial Observer, Platinum Partners signed a 10-year lease for the entire 23,274-square-foot 14th floor of the building last month. The hedge fund will pay rent starting in the mid-$70s per square foot, according to CompStak.