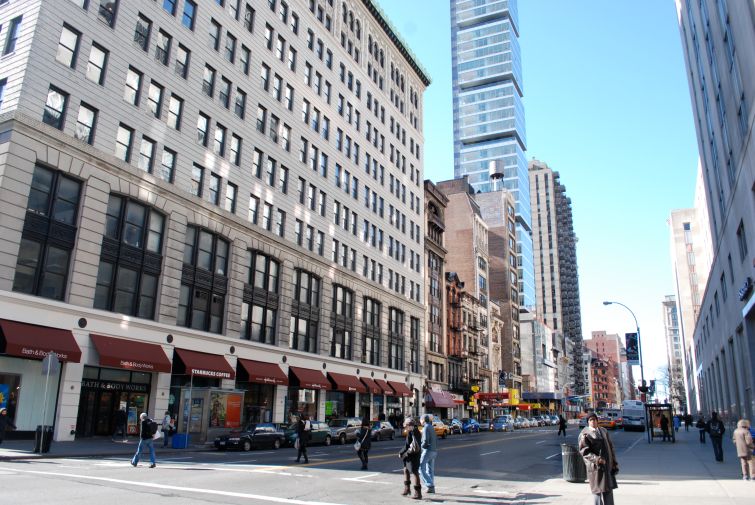 Flatiron 23rd Street Partnership is hoping to raise the profile of one stretch of its district that has been under the radar, in part due to scaffolding that has been up for years: East 23rd Street between Third Avenue and Avenue of the Americas.

She added: “We know upgrading the physical realm does draw new tenants and makes people feel good about investing in the area.” As of February, the BID tracked six ground-floor vacancies along East 23rd Street between Third Avenue and Avenue of the Americas.

For the last few years, East 23rd Street has suffered the blight of the scaffolding outside the unfinished One Madison, on Madison Avenue between 22nd and 23rd Streets. Related Companies’ glass residential tower is reportedly slated for completion this quarter.

The BID hopes to use a $575,000 grant received a few years ago for a one-to-one lighting replacement on 23rd Street, between Third Avenue and Avenue of the Americas, and along Broadway, between 21st and 28th Streets. The lighting program is wending its way through the community board process.

The 23rd Street stretch, which has come a long way since its homeless- and graffiti-ridden days, will get a boost from public WiFi, too, Ms. Brown said.

Flatiron BID was one of last year’s winners of the Economic Development Corporation-led “Wireless Corridor Challenge.”

“The Flatiron BID already offers free WiFi in our public plazas, but this new initiative broadens the services we provide, and right in the heart of the district that is increasingly home to tech entrepreneurs and creative services,” Ms. Brown said at the time.

The WiFi, to span 23rd Street between Third Avenue and Avenue of the Americas, and wrap around Madison Square Park, is 60 percent operational, Ms. Brown said. It is being funded by $150,000 from the BID and $137,800 from EDC.

Notwithstanding that the improvements haven’t all been put into place, developers haven’t been shy about investing on East 23rd Street.

Robert Lapidus, president of L&L Holding Company said in a statement to Commercial Observer: “Any beautification effort that can enhance and tie East 23rd Street to Madison Square Park on its most westerly point will be an immense help in improving the profile of the entire corridor.” L&L owns the 600,000-square-foot 200 Fifth Avenue between 24th and 25th Streets.

Update: This story has been edited to add a comment from Robert Lapidus, president of L&L Holding Company.