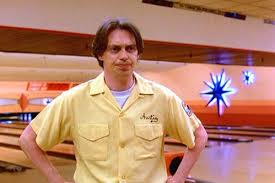 Steve Buscemi as ‘Donny’ in The Big Lebowski, looking not particularly happy.

William Macklowe reportedly plans to replace Bowlmor Lanes and a parking garage at 110 University Place between 12th and 13th Streets with luxury condominiums.

Website EV Grieve called it “dreary news,” noting a mini-spree of new development occurring in the vicinity, adding that the demolition of the popular bowling alley, established on the property in 1938, could begin as early as this summer.

Website comments offered mostly negative reactions to the new development in the area, including a condo project at nearby 17 East 12th Street.

“This new construction shows that no neighborhood is safe from an invasion of glass and steel luxury condos and the extinction of small businesses,” one said.

“They’re getting rid of Bowlmor? That is total fucking BS!” wrote another.

Another comment offered a mixed review: “We need more luxury housing like we need a hole in the head, but I’m sorry, nothing is more corny and lame and suburban than bowling.”

The New York Post had reported earlier this week that “leases for Bowlmor and a garage at the site expire imminently,” and that demolition for a new building would likely start this summer. Mr. Macklowe purchased a long-term controlling position in the four-story building back in the fall of 2012.