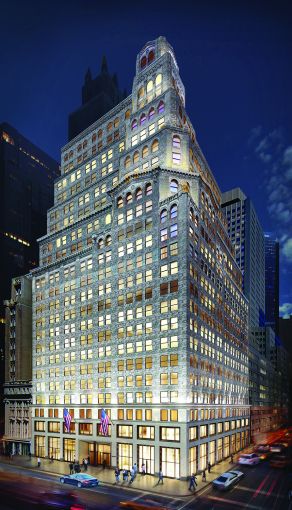 A rendering of 285 Madison Avenue.

In December 2011, 41-year-old advertising executive Suzanne Hart began an average Wednesday by entering the elevator in the lobby of her firm’s 285 Madison Avenue headquarters. As she stepped inside, the elevator suddenly leaped upward, tragically trapping Ms. Hart between the elevator and the wall of the now 88-year-old building. Two other elevator passengers, powerless to help, could only look on. Ms. Hart was pronounced dead at the scene.

Less than a year after the accident, Y&R, the nearly century-old advertising firm Ms. Hart worked for, agreed to sell the 27-story Midtown property to RFR Realty for approximately $190 million. So bad was the building’s condition that most suitors, including RFR, considered tearing it down and starting from scratch.

“The building was significantly neglected,” said Gregg Popkin, RFR’s chief operating officer, during a tour of the property last week. “The basic infrastructure was shot.”

Ms. Hart’s untimely death was attributed by many to the state of the poorly maintained property. At the time of her death, the Department of Buildings listed multiple violations on the building’s elevators, though none of them were due to hazardous conditions, according to a report in The New York Times.

Prior to the accident, in early December of 2011, Y&R had announced intentions to move its operations to 3 Columbus Circle, but the 285 Madison Avenue sales process seemed to escalate in the months following the tragedy.

Despite its decision to relocate, the venerable advertising agency disputes the contention that 285 Madison Avenue was neglected but concedes that the building was in need of significant renovations.

“I don’t think neglect is the word. Like any 90-year-old building, it required a complete renovation,” said David Sable, the company’s global chief executive, who first started working at the building in 1976.

The decision to relocate was instead motivated by the changing way Y&R was doing business, specifically the move away from corner offices and toward open-plan space. Still, it was big step for Y&R to trade the advertising corridor of Madison Avenue for Columbus Circle.

“I would argue very strongly that that building and the company defined Madison Avenue,” Mr. Sable said.

Y&R’s move away from 285 Madison Avenue is indicative of a larger trend in the advertising industry, which has slowly begun to trade a stretch of Madison Avenue in Midtown synonymous with ad men for Midtown South, Downtown Manhattan and other areas of the city more readily identifiable with the creative class.

Other tenants in the building, including Kang & Lee, Blast Radius, BrandBuzz and Bravo, also had intentions to move elsewhere at the timing of the accident, according to the Times. As Mr. Sable recalls, 285 Madison Avenue was no longer suitable for modern business practices.

“The building had originally been built to house small offices for doctors, dentists and maybe some lawyers, and it worked pretty well for a bunch of years,” he said. “But I remember in 1976, we went upstairs and went into back closets and still found old mock skeletons and X-rays from the doctors that had had offices there.”

Despite the mixed memories, the company hasn’t completely cut ties with 285 Madison Avenue. In fact, Mr. Sable brought with him to 3 Columbus Circle the “285” signage that had previously hung outside the building. The more somber memories of the building haven’t been forgotten, either, as Y&R established a garden in Ms. Hart’s memory.

Though it is surely on their minds, the new owners of 285 Madison Avenue stress the building’s new beginnings rather than its past tragedies. During Commercial Observer’s private tour of the building last week, Mr. Popkin casually introduced the lobby’s newly renovated elevator bay with its marble finishes and mirrored cabs. There was no mention of the accident.

In a time when the rezoning of Midtown East seemed a surer bet, rebuilding 285 Madison from the ground up may have been an enticing alternative. But for RFR, which prides itself on a reputation of repositioning old properties, there was potential in the existing bones of the building.

Even the Y&R executives who left the property behind agree that RFR made the right choice.

A year on from RFR’s acquisition of the building, the gut renovation of 285 Madison Avenue is 60 percent complete and is on schedule to conclude this spring. Work continues at a steady pace, particularly in the lobby, where steel girders have replaced some of the building’s stifling columns. Still, there is no urgency about the proceedings but rather a confidence that the completion deadline will be met.

Previously difficult to distinguish from the rest of the older building stock on Madison Avenue, 285’s dark and muddy exterior has been cleaned up to reveal a classic sandstone color, with the property’s unique architecture of setbacks and parapets more clearly noticeable.

It is inside, however, where the Studios Architecture-designed transformation of 285 Madison is truly visible. Though construction is ongoing, marketing has begun in earnest.

Early indications suggest that the new owner’s renderings of the repositioned property will closely resemble the finished product. A recently completed portion of the lobby has been accented with high-end finishes, including imported marble. The new owners have “spared no expense,” according to Mr. Popkin.

The building’s lobby is being expanded and updated to provide a more modern and spacious feel. Previously, a low-hanging, Moroccan-style arched ceiling greeted building tenants, but going forward, an expansive lobby with signage opportunities and 20-foot ceilings will be the norm. Retail locations will also buffer the lobby to the north and south.

Toward the rear of the ground floor, a yet-to-be named 4,000-square-foot restaurant is expected to open by the fall of this year. Open to both building tenants and outside patrons, the restaurant is also slated to provide catering services to the building’s conference center. What’s more, tenants will have access to an exclusive mezzanine lounge above the restaurant floor, complete with views of the open kitchen.

Despite the considerable progress, hard hats and scaffolds are still more prevalent than briefcases and computers at 285 Madison Avenue. But on the building’s fourth floor, a newly established marketing center has created an image of what might be possible for future office tenants.

CBRE’s Mary Anne Tighe, Gregory Tosko, Stephen Eynon and Evan Haskell are spearheading leasing efforts at the new building and have targeted not only traditional Midtown tenants but also the media and creative tenants quickly fleeing the stifling rents of Midtown South. Ms. Tighe was not available to comment on this story.

The marketing center has three mock layouts for potential tenants, including the more traditional law firm aesthetic with corner offices and the open-plan creative space, complete with ping-pong tables and scooters to round out the look.

It is financial services, however, where the leasing team is the closest to securing a deal. A hedge fund is deep in negotiations to take space in the tower portion of the building, where floor plates are approximately 11,500 square feet.

Should the deal close, it would be the first step toward achieving an optimistic leasing goal for 2014.

“We expect to have the building substantially leased this year,” Mr. Eynon told Commercial Observer during the building tour.

The leasing team has thus far resisted the urge to offer split floors for multiple tenants, though Mr. Eynon conceded that that could change depending on how leasing activity proceeds going forward. “Ideally, we’d like to keep it to full-floor tenants,” he said.

The building will boast what RFR and CBRE call “hotel-like quality” amenities, including a roof deck, a gym, a bike room and access to high-end dining. The vision is that office tenants should feel comfortable accessing the building at all hours of the day and night.

For the understandably safety-conscious, all of the systems inside 285 Madison have been replaced, including elevator, mechanical, electrical and air-conditioning. RFR Realty and CBRE insist that 285 Madison will truly be a new office facility within the skeleton of the existing building.

The amenities won’t come cheaply. Asking rent ranges from $68 per square foot at the base of the building to $89 per square foot for the tower floors. Though smaller, many of the upper floors include accessible terraces and views of the Empire State Building to the south.

“It was like damaged jewelry, and we have polished it up,” Mr. Popkin said of the building. “It is literally a top-to-bottom renovation.  It’s a dramatic difference.”