All of the Lights: Famous Illuminated Signs in the New York City Skyline 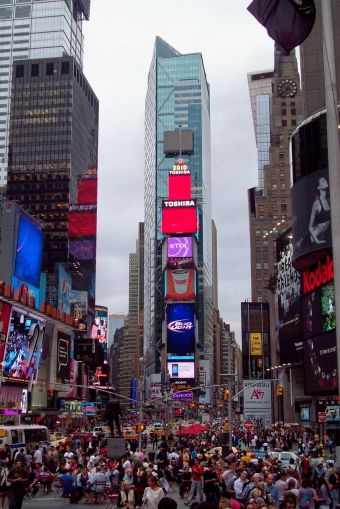 In the lead-up to New Year’s Eve last week, The New Yorker reported that the largely vacant 1 Times Square—the home of the ball drop—makes $23 million, or 85 percent of its annual revenue, from advertising signage that bathes Times Square in a neon commercial glow. Signage is a sought-after prize of the New York skyline. Here are a few of the most famous illuminated signs around town.

New Yorker Hotel, 481 Eighth Avenue: It may not rank among New York grandest hotels, but the New Yorker has earned its spot in city lore by way of the red neon sign that sits atop the 40-story Midtown building—an integral part of the New York skyline. First opened in 1930 before closing in 1972, the hotel reopened in 1994 and over a decade later was the recipient of a thorough makeover that restored the building’s Art Deco details.

GE, 30 Rockefeller Plaza: Comcast’s acquisition of NBCUniversal from General Electric early last year called into question the future of the famous neon sign atop the Rockefeller Center property. The deal included naming rights to the building, and while there has yet to be a transition, it may not be long before the GE sign is no more. It wouldn’t be the first time the branding has changed—the building featured a neon RCA sign prior to being changed to GE in the 1980s.

Pepsi-Cola, Long Island City: A standout along the banks of the East River since 1936, this Pop art ode to LIC’s industrial past survived the recent addition of high-rise apartment buildings. Developer TF Cornerstone recessed one tower’s first eight floors to make room for the neon red beacon, which for decades was the most prominent Queens structure visible from Manhattan. Legend goes that actress Joan Crawford, a Pepsi board member, had the sign erected directly across from the exclusive River House after its co-op board rejected her. The board’s president at the time had formerly led Coca-Cola.

Citigroup, 1 Court Square: There are several prominent signs in Long Island City but certainly none that stand taller than the “Citi” sign atop the 50-story Citigroup Building at 1 Court Square, which is the tallest building in New York City outside of Manhattan. While a precise price tag on the sign’s value is hard to come by, the inherent value of the branding opportunity is perhaps no more apparent than in the sale of the building in 2012 to a group of investors for nearly $500 million. 1 Times Square: When Lehman Brothers purchased 1 Times Square in 2005 for $27.5 million, the bank decided it made more sense to market the tower for its signage opportunities rather than its office space. The entire exterior was modified to add a grid frame for mounting billboard signs, and in 1996 its first electronic billboards were installed. When Lehman sold the tower to the Jamestown Properties in 1997 for $117 million, filings revealed that the billboards had generated $7 million yearly, which by 2012 had grown to more than $23 million.