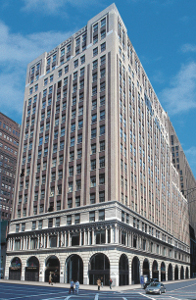 PVH Corp. has signed a long-term renewal and expansion deal for its Warnaco Group unit at the Empire State Realty Trust’s 501 Seventh Avenue. The renewal adds more than 37,000 square feet to the lease, upping Warnaco’s total occupancy to 223,616 square feet.

PVH, which owns brands including Tommy Hilfiger, Calvin Klein and IZOD, acquired Warnaco, which owns the licenses for Calvin Klein jeans and underwear, in February of this year. The $2.9 billion deal brought all Calvin Klein-branded apparel under a single entity and followed the company’s previous acquisition of Tommy Hilfiger for $3 billion in 2010.

The 18-story tower at 501 Seventh Avenue is part of the Empire State Realty Trust, a real estate investment trust launched by the Malkin family in October. The REIT, whose properties include the Empire State Building, initially priced at $13 per share, before closing at $13.10 on its first day of trading. Shares in ESRT traded at $14.04 late Tuesday, down 1.68 percent.

“501 Seventh Avenue was in the opening stages of a major transformation, and the Times Square South submarket was just beginning to change from a garment to office tenant market, when Warnaco moved in approximately 10 years ago,” said Tom Durels, chief of property operations and leasing at ESRT, in a prepared statement.  “Since then, the Times Square South submarket is attracting quality office tenants from a wide range of industries.  We are thrilled to have PVH expand and extend its commitment with us, and we look forward to continuing our long-term relationship.”