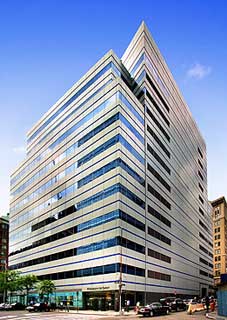 The school, part of the City University of New York system, has been a tenant in the building for a decade and will remain on the entire second and entire 10th through 14th floors.

“BMCC is an integral part of Downtown New York’s spirit and resiliency,” said Burt Resnick, chairman and chief executive of Jack Resnick & Sons, in a prepared statement. “We are delighted that the college has recommitted to 255 Greenwich Street for another two decades, continuing its culture of learning and academic enrichment for many years to come.”

The Resnick family built the 14-story, 600,000-square-foot office building in 1984. Formerly known as 75 Park Place, the name of the property was changed in 2012 to recognize the reopening of Greenwich Street through the World Trade Center site. Asking rent at the building is approximately $50 per square foot.

The building is 100 percent occupied and will welcome Fairway Market’s first Lower Manhattan location late next year. The 52,242-square-foot retail space at the property will house the popular supermarket chain’s sixth location.

Mr. Greenberg did not immediately return a call requesting comment.