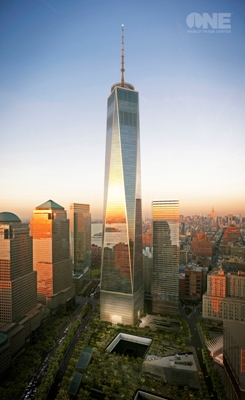 For the first time since construction workers topped off 1 World Trade Center in May, the Durst Organization this morning unveiled a crisp, white-walled model office space that tenants could be replicating as early as next year. Replete with floor-to-ceiling windows and unobstructed views of the city, office spaces below the 64th floor will command $75 per square foot.

“This is the beginning of a big year for us as we begin our transformation from a construction site to an office building,” said Jordan Barowitz, director of external affairs for Durst, before introducing the project’s director of leasing, Eric Engelhardt.

“What we’ve done here is taken the first and biggest step in being able to showcase what the office space can look like for tenants,” Mr. Engelhardt added. Designed to replicate a number of different office layouts, including traditional office space and open-plan creative space, the 63rd floor will become the Durst Organization’s de facto sales office at the building, which stands 55 percent leased 14 months from opening in 2015. Despite remaining vacancy—no major corporate tenant has committed to 1 World Trade since Conde Nast—Durst representatives spoke with unbridled optimism about the building’s prospects.

Both Douglas Durst, chairman of the Durst Organization, and Mr. Engelhardt, director of leasing for 1 World Trade Center, hinted that advanced discussions with potential tenants were ongoing and announcements, if not imminent, were forthcoming.

“It was quite an effort between us and the Port Authority to get this place done, but by working together it was done very quickly and we are very impressed with how it has turned out,” Mr. Durst said to an assembled group of reporters.

The marketing center, designed by Gensler, is close to but not entirely recognizable as fully-outfitted office space. Duct work and fireproofing is still evident on much of the ceiling and approximately half of the floor remains under construction.

Other visitors to the space opined that space seemed smaller than expected . The 63rd floor’s interior—column free—is dominated by large service elevators, but views out the window can be experienced from as far as 45 feet within the space and design flexibility allows for variety of tenant fit-out options, according to a spokesperson for the developer.

“In fact the flexibility of the big expanse of column-free space – with views out the window from as far as 45 feet within — is one of 1WTC’s biggest selling points, allowing the widest possible design options,” said Steve Vitoff, a spokesman for the Durst Organization, in an email sent to The Commercial Observer.

Despite the morning haze that slowly began to burn off throughout the course of the tour, views in every direction are noteworthy.

To the south, Lower Manhattan and the Statue of Liberty dominate the skyline. Looking west, Battery Park City and Jersey City draw your attention. Northward, much of the island of Manhattan is visible. Finally, to the East, Frank Gehry’s 8 Spruce Street, the Brooklyn Bridge and Brooklyn itself can be seen a short distance away.

Tara Stacom, executive vice chairman at Cushman & Wakefield, and Mr. Engelhardt are responsible for heading up the leasing efforts. The marketing and leasing of the building is moving ahead of schedule, according to Ms. Stacom, who conceded that the three million-square-foot building is not expected to be fully leased upon opening.

Ms. Stacom was enthusiastic about the 100,000 square feet of pre-built space and build-to-suit space reserved for smaller tenants on the 45th and 46th floors. Interest in the program, she noted, is high.

Those potential tenants that make the trek up to the 63rd floor will be greeted by a wall displaying the potential monetary benefits. “Financial Incentives,” the display reads, before listing a variety of enticing add-ons, including $6 to $8 per square foot as of right benefits, reduced real estate taxes and “additional discretionary benefits.”