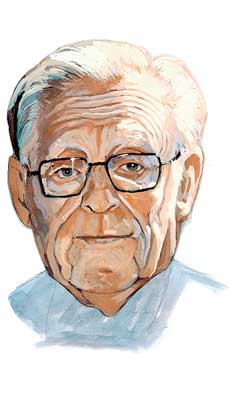 In the past year, New York real estate tycoon Larry Silverstein lost a major ongoing court battle, saw the symbolic topping off of One World Trade Center, which he began development on in April 2006, and came closer to his dream of building in China.

The “Energizer Bunny of New York real estate developers” also started to wind down after 60 years in the business, telling The Wall Street Journal in April that he will relinquish his role as chief executive to Silverstein Properties’s co-CEO Marty Burger, while staying on board as chairman.

That hasn’t changed much in the way of his habits. The frenetic 82-year-old developer is now honing in on his first project in Asia’s largest country with a population of 1.35 billion people. Silverstein Properties announced in June that the company is wrapping up a deal to construct a large mixed-use property in the southern city Shenzhen with the help of a local partner and the local government. Opening property in China, something his younger coequal Rob Speyer of Tishman Speyer accomplished in 2006, has reportedly been a dream of Mr. Silverstein’s since the late 1990s.

The Brooklyn native, who started his first development outside of the U.S. in Poland in 2011, also has plans to start breaking ground in Israel for the first time, where he says he will focus on hotel and residential developments to take advantage of the country’s growing economy and oil and gas reserves.

At home in the states, while construction projects have moved forward, not all has gone smoothly. Mr. Silverstein, who signed a 99-year lease to control the Twin Towers six weeks before the tragedy of Sept. 11, 2001, had been trying to recoup billions more from American Airlines and United Airlines, which were involved in the two crashes.

In a lawsuit he filed nearly a decade ago, Mr. Silverstein alleged that both companies were responsible for security breaches and owed him a total of $8 billion to cover damages. He has yet to receive that amount as a federal judge ruled in July that Mr. Silverstein’s investment group, which already collected $4.1 billion from insurers in 2004, would not be allowed to collect insurance payments twice.

Silverstein Properties opened its 7 World Trade Center in 2006, the same year it began development on 1 World Trade Center, and is in the process of completing the other five towers at different phases. Mr. Silverstein told The Commercial Observer in March that 4 World Trade Center, the next tower to open, is nearly 50 percent leased. The veteran developer said he is negotiating tenant deals that will allow him to receive financing for the completion of towers 2 and 3, as part of an agreement with the Port Authority of New York and New Jersey, the land’s legal owner.

Silverstein Properties, which oversees a portfolio of 9 million square feet almost entirely in New York, has $10 billion worth of development in the works, including the three new World Trade Center office towers, a Four Seasons Resort at Walt Disney World in Orlando, Fla., and a Four Seasons Downtown New York Hotel combined with luxury condos at 30 Park Place.

Mr. Silverstein, who did not return calls for comments, has spoken on more than one occasion of his eagerness to see the company’s current projects, the World Trade Center towers among them, reach completion.—Damian Ghigliotty