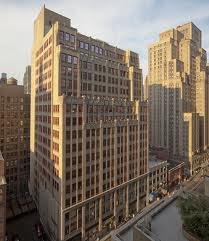 Regus will take responsibility for the build out of the space and is expected to move in during the first quarter of 2014. Asking rents were in the low-$50s per square foot, according to a source familiar with the negotiations. The lease at 31 Penn Plaza is the latest in a series of deals for the company. Earlier this year, Regus expanded its presence downtown signing 10-year leases at 3 World Financial Center and 101 Sixth Avenue. The company already offers a number of locations in close proximity to 31 Penn Plaza, including 275 Seventh Avenue, 112 West 34th Street and 5 Penn Plaza.

Previously, Crain’s New York had reported that Regus was in the negotiations for space at 31 Penn Plaza and close to securing a deal.

Savanna, a real estate private equity firm, acquired 31 Penn Plaza in 2011 and began a $25 million capital improvement plan. As reported by The Commercial Observer, Real Estate Arts recently signed a 6,822-square-foot lease at the 18-story building and will be relocating from 641 Avenue of the Americas.