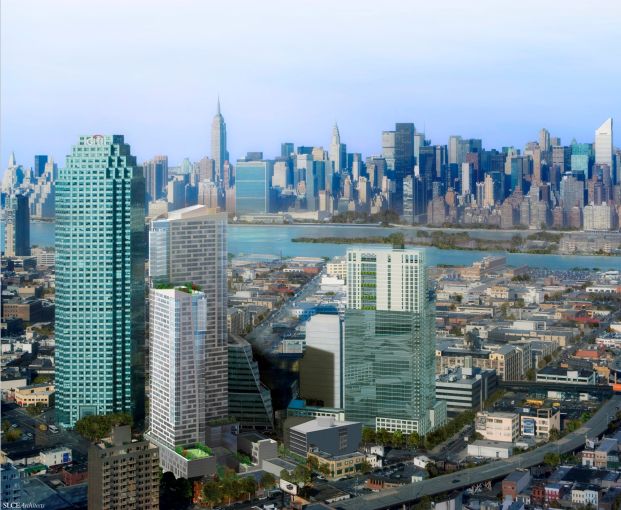 Rockrose Development Corp. is in the process of demolishing seven dilapidated Long Island City warehouses to pave the way for the construction of what will become the tallest residential building in Queens, The Commercial Observer has learned.

The 50-story, 907,000-square-foot, 500-foot-tall building at 43-25 Hunter Street will not only be the tallest, but it will also feature 975 units – more units than any other residential building in Queens, the firm said.

“That means a lot of apartments with a lot of very amazing views of the city,” said Justin Elghanayan, who runs the company with his father, Henry.  “Court Square is zoned very high, but all the areas around it are very low.”

Rockrose will open up bidding to find a subcontractor in the coming weeks, with construction of the property slated to begin in the fourth quarter and completion of the estimated $400 million project scheduled for sometime in 2016.

The property is situated in the Court Square area of Long Island City, where the 50-story Citigroup tower at One Court Square once stuck out like a sore thumb.  But Rockrose has led the way in the methodical transformation of the area’s residential and retail landscape and Mr. Elghanayan believes his new tower will sit well alongside Citigroup’s.

“I always looked at the Citigroup tower and it looked so lonely.  I said, ‘Citigroup needs a girlfriend.’  So in my mind, this building is its girlfriend,” he said.

“You know when you have a couple and one person kind of softens the other person?  I’m hoping that this building will have the same effect architecturally on the Citigroup tower because right now it’s so monolithic and lonely on the skyline.”

Rockrose is also enrolling in New York City’s Voluntary Cleanup Program, created in 2011 by the Office of Environmental Remediation to facilitate redevelopment of underutilized sites with low to moderate levels of contamination.  The program achieves standards that protect human health and the environment, while keeping projects on schedule and offering developers up to $125,000 in grants towards remediation, said the OER’s director, Dr. Daniel Walsh.

“This program demonstrates that a developer has done everything necessary to make these sites among the safest in the city,” Dr. Walsh said, noting that roughly 100 sites have been approved since the program’s inception.  “We want to keep finding ways to encourage developers to take on these types of projects.”

This summer, Rockrose is also kicking off leasing at its newly constructed, 709-unit Linc LIC building in Court Square; and the firm has plans to construct the Eagle Loft at 43-22 Queens Street, an approximately 700-unit warehouse-to-residential conversion; and is retrofitting a number of retail spaces located within a stone’s throw of one another in the square.

Rockrose spearheaded the development of Long Island City over a decade ago after it purchased a 40-acre site along the waterfront from Pepsi and began its construction of soaring glass and concrete towers that are now synonymous with the neighborhood’s waterfront.

In 2009, Rockrose, owned by members of the Elghanayan family, split into two entities (Rockrose and TF Cornerstone), with TF Cornerstone retaining most of the waterfront properties and Rockrose focusing in the Court Square area.