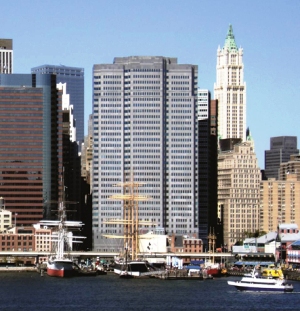 “There is no limitation on who we would target [as tenants,] the space is so flexible,” Mr. Constable said.

As reported last week, C&W was named as the exclusive leasing agent at Jack Resnick & Sons’ One Seaport Plaza at 199 Water Street where there is currently 70,000 square feet of availability on the 14th and 15th floors.

The C&W leasing team has “shaken hands” on one deal and is currently working on the details of the lease, which is expected to close by the end of the month.

“Everyone is motivated to get that deal done” Mr. Constable said. “The tenant is anxious to get in this year.”

The property at 199 Water Street, where pricing on existing vacant space is $46 per square foot, is attracting a number of potential tenants from the internet, media and communications industries, who are being priced out of Midtown South and Hudson Square.

“Those tenants have modified their vision and are looking at Downtown spaces and seeing them in a different light,” according to Mr. Constable. “It’s not a fight for us, the way it was five years ago, to convince those users this is the type of place for them.”

Marketing materials for the property will be designed to convey how 199 Water Street can serve the needs of media and communications tenants.

Despite the interest from media tenants, C&W will not neglect interest from the financial services industry, which is reevaluating the Downtown market. Current tenants such as BGC Partners and Tullett Prebon, both international brokerage firms, point to the building’s continued appeal for the financial tenants.

Currently, 199 Water Street is undergoing a large capital improvement plan, most of it aimed at addressing concerns raised by Hurricane Sandy’s impact on Lower Manhattan. As part of the plan, the building’s critical systems are being moved above the ground floor.