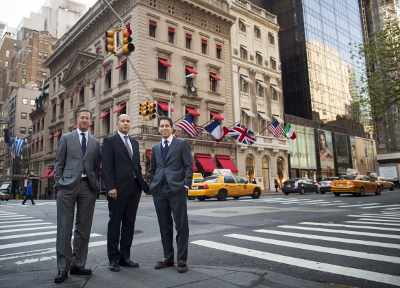 One day in the late 1980s, three Brooklyn brothers in their teens—Isaac, Haim and Richard Chera—followed their grandfather, Isaac, and their father, Stanley, on a trip to Manhattan. While not in school, the brothers would spend much of their spare time in the Fulton Street children’s clothing store that their grandfather had opened in 1948, in a space formerly occupied by a hat store, Suzette Millinery Shop. At the time, lacking the money to replace the previous banner, Isaac Chera simply tweaked it, naming his business Suzette Kiddie Store. Only later, after having expanded to several other stores, did the family change the name to Young World. Soon, the elder Isaac Chera started to invest in real estate. The best advice he gave to his family, according to his grandson, Haim, was to always buy the building where they had a store.

The Chera brothers grew up learning the art of retail in the family’s stores and real estate by regularly attending to closings. That day in 1980s Manhattan was particularly exciting, though. Three generation of Cheras were present for the closing on the Louis Vuitton building, at 1 East 57th Street. Done in partnership with real estate investor Sol Goldman, it was their first acquisition on Fifth Avenue.

In a series of interviews, Isaac, Haim and Richard Chera gave The Mortgage Observer insight as to how they run their family business, Crown Acquisitions, which currently owns several million square feet of real estate for approximately 100 properties in the city’s main shopping streets.

When asked about their roles and their titles within the company, they answered, “brothers.” From a professional standpoint, they described themselves as “independent” and “inter dependent.” They are a family with development capabilities, they said—the ability to target the right acquisitions and relationships with tenants and capital partners.

Recently, Crown Acquisitions was selected as one of the final bidders—along with Vornado and Ashkenazy Acquisition Corp.—for the purchase of the Carlyle Group’s 650 Madison Avenue, which is expected to fetch up to $1.3 billion.

Between 2011 and 2012, Crown Acquisitions, with partners the Carlyle Group and Kushner Companies—whose owner also owns the Observer Media Group—sold the retail condo at 666 Fifth Avenue for a total of $1 billion. Last year, in a joint venture with Oxford Property Group, Crown Acquisitions purchased a 49.9 percent stake in the Olympic Tower at 641 Fifth Avenue and the adjacent Versace and Cartier mansions from an affiliate of the Alexander S. Onassis Public Benefit Foundation.

The brothers said that the financing was the easiest piece of the puzzle. Their retail experience was a convincing factor in Wells Fargo taking on a $250 million senior mortgage for the property, according to Robert Rosenberg, a managing director at Wells Fargo Real Estate Capital Markets. That loan amounted to a 30 percent loan to cost and valued the property at about $840 million.

The Cheras said that they are looking to refinance the property for both a longer term and higher proceeds, taking advantage of the low interest rate environment for 10-year loans in the 3 percent range.

“In the year since buying [the Olympic Tower] our NOI has jumped up significantly,” Haim Chera said. “When we signed the contract, the income of the property was about $27 million. We expect to double that in our first year of ownership. We worked with our existing tenant first. The most prominent example, Cartier, chose to renew with us. Their lease was coming to the end of a very long-term lease and they chose to renew and to stay for a very long time.”

At the time of the acquisition, it was reported that tenants paid rents in the $1,000 per square foot range, in an area where median asking rents are $3,000 per square foot, according to the Real Estate Board of New York’s retail report for spring 2013. When asked if they are currently achieving rents in that range, Haim Chera said that they clearly were.

“They really know what they know,” said Mark Schoenfeld, a managing director in the Washington, D.C. office of the Carlyle Group. “They know street retail in New York and they focus on it.”