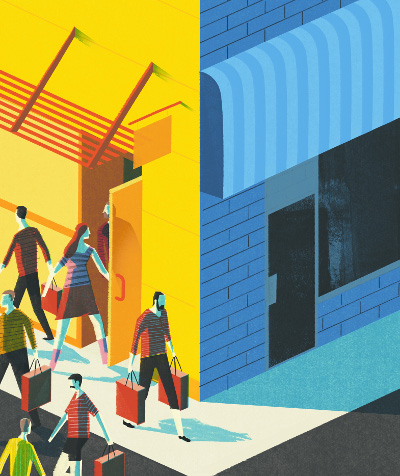 As the economy continues to build steam, a new Brooklyn finds itself craving a new retail culture—and developers and financers are keeping close watch. While New York’s most populous borough has seen a large number of residential buildings take shape in the past year, financing for retail construction projects and acquisitions are just now beginning to catch up.

When asked, the developers behind several of the latest big retail projects told The Mortgage Observer that many of those properties would have a more chic look and feel and a more versatile use than traditional shopping outlets and malls. One common point of comparison has been Jamestown’s Chelsea Market, the high-end urban food court and shopping center with galleries and production studios mixed in.

“For Brooklyn, big box has its place, of course, but I don’t see it as the future,” said Jason Muss, whose family-owned Muss Development transformed government office space at 345 Adams Street in Downtown Brooklyn into one such trendier retail destination. “I question if there are that many places to development big box, especially in North Brooklyn, and how many people in the community would want it.”

Developments like the retail condo at 345 Adams Street show that Brooklyn still has its divides. In some parts of the borough, such as the middle-class neighborhoods below Prospect Park, big box retailers and department stores still have a major presence. Meanwhile, at the Fulton Street Mall—one of Brooklyn’s densest shopping districts stretching 17 blocks, just a stone’s throw from 345 Adams Street—a growing number of national retail chains have started to take root as well. Those chains include Gap, Aeropostale and Raymour & Flanigan, while Century 21, T.J. Maxx and H&M stores are slated to open later this year.

“The retailers are now coming in to support all of the new residential and hotel development and all of the high incomes that come with it, especially in Downtown Brooklyn and Williamsburg,” said Barry Fishbach, an executive vice president at Robert K. Futterman & Associates, a brokerage and consulting firm which specializes in urban retail.

“With nearly 2.6 million people in Brooklyn, it doesn’t make sense for them to have to go to Manhattan to shop,” he continued. “So these new retailers are coming in to service the local population, which keeps growing, as well as all of the tourists visiting these areas because it’s cool to go there.”

Big banks are financing many of those new retail properties in Downtown Brooklyn, said Aaron Birnbaum, executive vice president and co-founder of Meridian Capital Group. Singapore-based United Overseas Bank provided developers Crown Acquisitions and the Gindi family with the $65 million loan to refinance 490 Fulton Street where Raymour & Flanigan recently opened its doors. And Capital One provided loans to United American Land for the redevelopment of a landmark building at 505 Fulton Street where H&M has signed a 15-year lease, he said.

At 345 Adams Street, Muss Development is nearly done readying the once municipal-heavy site for the arrival of several specialty food service chains that will bring it to full occupancy. Tenants Panera Bread and Potbelly Sandwich Shop have already set up there.

Muss Development purchased the 36,000 square-foot space from the city government in 2007 with a multimillion-dollar loan from HSBC. Morgan Stanley refinanced the property with an $18.5 million loan in November 2012.

“We felt that restoring the building properly would help in our leasing efforts, which it did,” said Jason Muss, who oversees construction and marketing for the Forest Hills, New York-based development firm. “When we took over the building, the recession was going full swing, so it was a good thing that we took the time to restore the building and make it look as good as possible.”

Mr. Muss and his father Joshua Muss, early pioneers in the redevelopment of the area, also own the Marriott Hotel at 333 Adams Street, which became the first hotel in Downtown Brooklyn when it opened in 1998, and the Brooklyn Renaissance Plaza office tower at 335 Adams Street, which opened the same year. The developers are looking to open an additional retail space under the hotel in the near future, said Mr. Muss. “We were very laser-focused on the property at 345 Adams because we knew there needed to be an attractive and well-thought-out retail corridor right off the Brooklyn Bridge,” he said.