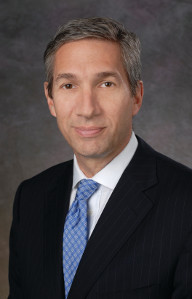 The Mortgage Observer met with Steve Kohn, head of one of three service lines under the capital markets department at Cushman & Wakefield. Mr. Kohn shared his outlook for 2013 and details about he types of deals his growing group is busy working on.

The Mortgage Observer: How did you get your start in the industry?

Steve Kohn: My first job in real estate was with Reliance Development Group, which was a subsidiary of Reliance Insurance in Philadelphia. The president of Reliance Development Group was a gentleman named Henry Lambert, who still is very active in real estate here in New York City. He hired me, and I actually worked for his other business—he had a food business called Pasta & Cheese. I worked for the summers at Pasta & Cheese, and then when I graduated college, I knew that he had a big job in real estate.

What were you doing for him?

I was working on a development project in Center City, Philadelphia, which was just under construction when I started there.

I joined Sonnenblick Goldman in 1996. I was a managing director, and I became president in 2000.

Once Cushman & Wakefield acquired the remaining interest, were you hired into your current position?

What types of deals are you working on the most now? Are you doing lots of refinancings? I know that you worked on 71 Smith Street and 100 Church Street …

… and 1 Court Square in Long Island City. Yeah they’re all different, so our group, what we do is actually what our name is. We raise debt and equity financing. And when I say equity financing, that’s really arranging joint ventures between investors and owner-operators and developers who require equity capital. Or it could also be a joint venture between two large investors, and we arrange debt financing, which could be either acquisition loans, construction loans, refinancing permanent loans, mezzanine loans, etc. So it’s arranging all types of financing. And I also work very closely with the investment sales team here in New York on New York investment sales.

When you arranged $230 million for 100 Church Street last summer, you said it was one of the most competitive deals you had worked on recently. And now?

They’re all competitive now. That was a little earlier. Right now the debt market is so liquid and flush with cash and demand for mortgages that right now almost everything that we’re working on is very competitive. Lenders—whether CMBS lenders or life insurance companies or U.S. and offshore banks—it’s a very competitive lending environment right now. And the loan sizes have gotten larger, too.

Is the equity side equal to the debt side in terms of the time you spend working on each?

Yes I would say it’s probably about equal. It varies year to year.

What’s your outlook for the rest of the year?

Clearly I’m very optimistic about New York. I think there are still parts of the country that are lagging—some of the secondary and tertiary markets. But most of the major markets, which would be Boston, New York, D.C.—well, D.C.’s a little flat right now, for obvious reasons—San Francisco and L.A. and Seattle—which kind of goes in and out of that top five markets—I’m very optimistic [about]. We see corporate earnings have been pretty strong; it looks like we’ll have low interest rates for at least another year or two based on everything you read. There hasn’t been much new construction to create supply problems, so I’m fairly positive. We obviously would like to see more jobs created beyond New York.

What do the secondary and tertiary markets need? A robust CMBS market?

Well that certainly helps, but at the end of the day, you still need job growth, job retention. Some of those markets will have it, for example like Austin, Texas, which is performing very well. Other markets may not have the type of industry that’s growing right now, and it’s going to be a little slow for a while. What happens is that they start to attract capital, as the primary markets get so expensive. Sometimes those markets have to wait until that happens.

What makes the services that you provide on the debt side different?

I’m not sure that it’s different. There are many good firms out there. We’re certainly one of the top firms, in my belief. I think what makes us different than some is that having the ability to draw on some of the other groups within Cushman & Wakefield gives us tremendous advantage.

You work with all different lenders?

Life insurance companies, banks—both domestic and offshore—conduits, finance companies, mortgage REITs. We’re kind of indifferent as to where the debt gets placed. We just want to get the best terms we can get for our clients. There are some firms that represent lenders, but we don’t do that, because we feel that’s a bit of a conflict.

Any of those lenders pulling ahead?

CMBS is definitely growing more rapidly than the others. Banks seem to be in more of a 50 percent range of the market, and then the balance seems to be split between CMBS and the life companies. That’s where you see some movement.