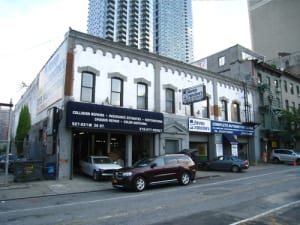 ERG Property Advisors has announced that it is exclusively marketing a development site at 527-531 West 36th Street for $10 million.

The property will ultimately be turned over to the Hudson Yards Development Corporation as it falls within the four-acre Hudson Park and Boulevard project, which represents Phase II of the larger Hudson Yards development project.

Until eminent domain goes into effect, the new owner may continue to collect $425,000 per year in rent from the current tenants, which includes a high-end automotive repair shop, or they can knock the building down, said Richard Guarino, who is exclusively marketing the property along with Clint Botway.

“They can keep them until eminent domain, but then you have to knock the building down and hand the city the deed,” Mr. Guarino said.  “It’s unlikely, but it could be five or 10 years before eminent domain.”

It has not been disclosed how much the new owner can expect to receive once the property is handed over to the city, but sources said it will likely be in the $100 per foot range.

The property has 44,698 buildable square feet of total development rights (once the existing building has been removed), and the air rights are not constrained by Inclusionary Housing restrictions, unlike those sold by the city, Mr. Guarino added.

The current owner, Convention Center Hardware and Supplies LLC, owns several other properties in New York and is selling the property in order to move on to other opportunities.

Hudson Park and Boulevard, slated to become an approximately 4-acre system of tree-lined parks and open space, will run between 10th and 11th Avenues from West 33rd to West 42nd Streets.

The Park will extend from West 33rd to West 39th Streets, with a pedestrian connection from 39th Street to 42nd Street.