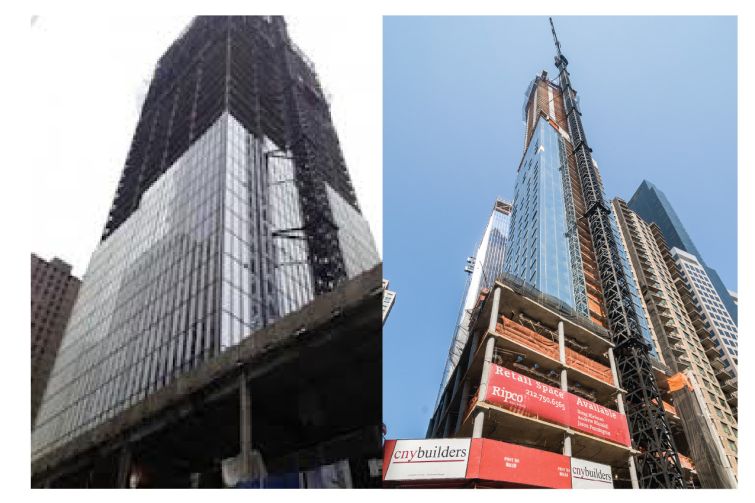 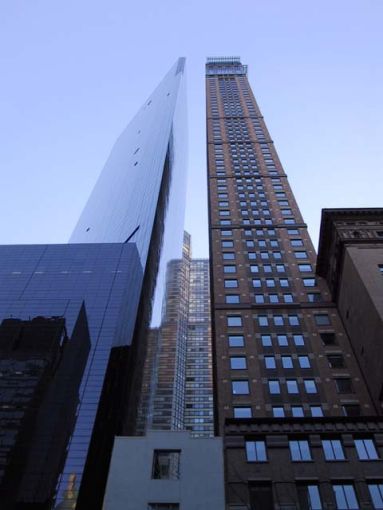 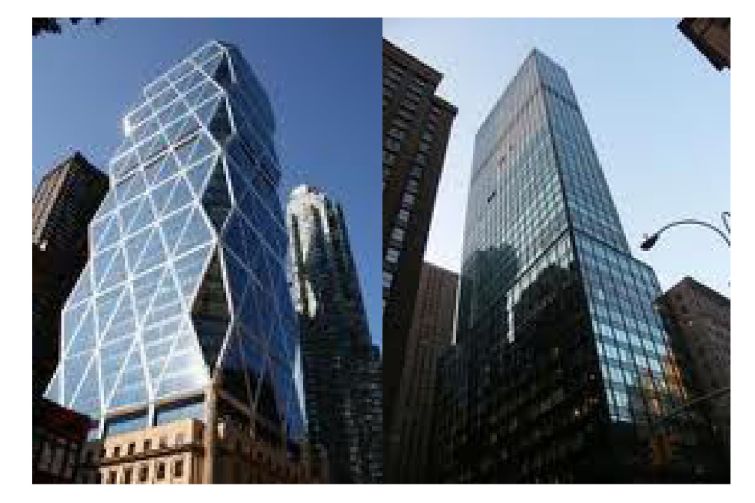 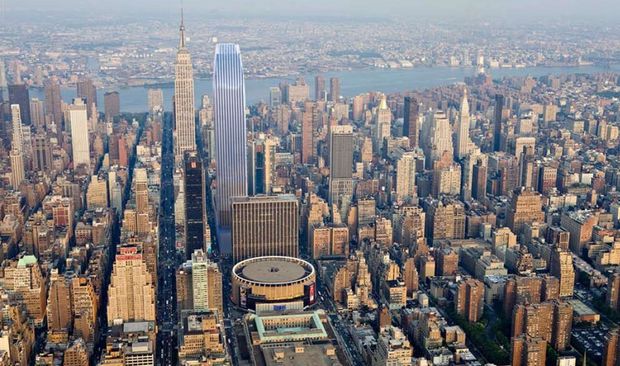 1717 Broadway, a new hotel development that has the distinction of being the tallest in the Western Hemisphere, has topped out at a lofty 750-feet, the tower’s developer Granite Broadway Development and its construction manager CNY Builders announced on Thursday. The building will house a Marriott Courtyard on the lower floors and a 261-unit extended stay hotel at the top that will also be operated by Marriott. As its height suggests, it will permit its guests impressive views of the city. But in the dog-eat-dog world of New York City real estate, so too will the building, which already is distinct for the way its thin profile dramatically contrasts with its soaring height, also stand in the way of such ogling from the upper floors of its neighbors. 1717 Broadway will obstruct to a degree the eastward views for 250 West 55th Street, a new office tower just a block west that is in the process of being developed by Boston Properties. The situation is not the first time a new tower has been built only to have its views usurped by – or be the usurper of – a rival’s. There is a ruthless math to tower development in Manhattan and the addition of one building to the skyline almost always subtracts from the views of another. In the slideshow that follows, The Commercial Observer examines similar view-blocking rivalries that have cropped up in the city over the years.

SEE ALSO: US Office Sales Sank 28 Percent in 2022: Report
When Harry Macklowe built Metropolitan Tower in the mid 1980s, a sleek, black triangular tower that rises to 715-feet on West 57th Street, the building caused consternation among neighbors, primarily to the south whose views of Central Park would now be blocked. Little did Mr. Macklowe know at the time that Rockrose Development would build a soaring tower of its own, less than 50 feet to its western flank, a proximity so tight, it appears at first glance as if the two towers are locked in a skyward embrace. Furious, Mr. Macklowe attempted at the time to acquire the dwarfish townhouse that sat between the parcels in order to try to impede Rockrose’s development, a property that is home to the Russian Tea Room. In the end, both Mr. Macklowe and Rockrose were unsuccessful in trying to acquire that building, 150 West 57th Street, and Carnegie Hall Tower rose, slimmer that it otherwise could have been.
Perhaps it’s karma. Both Metropolitan Tower and Carnegie Hall Tower will have their views of Central Park impeded by the One57, a new roughly 1,000 foot tall tower being built by developer Gary Barnett’s real estate company Extell just across 57th Street from the two buildings.
Mr. Barnett has had to wrangle with competitors who would like to do to him what he did to Carnegie Hall Tower and Metropolitan Tower. The real estate investment trust Vornado owns the residential building at 220 Central Park South and wants to build a super-tower of its own on the site. The problem with that for Mr. Barnett is that such a development would block another huge residential tower he is planning to build at 225 West 57th Street that will house a large Nordstrom department store in its base. In order to block Vornado from moving ahead with plans, Mr. Barnett sneakily bought the garage lease in the base of 220 Central Park South in order to hold Vorando from proceeding with the project and blocking his views before he can even get his tower off the ground.
Vornado too has seen views vanish in the shimmering glass facade of a prominent tower. The Hearst Building, a much celebrated accordian shaped tower built in recent years on 57th Street and Eighth Avenue, blocked pretty Hudson River views for 888 Seventh Avenue, a high end office tower Vornado owns a block east.
Another tremendous building that Vornado plans to develop in the future, 15 Penn Plaza, drew criticism not for blocking the views but significantly altering views of a neighbor. When Vornado received approval for the over 1000-foot tall office skyscraper with the city, landlord Anthony Malkin, who owns the nearby Empire State Building, balked, saying that the new building would alter his iconic tower’s visibility and signature presence in the city’s skyline. Mr. Malkin’s complaints were ignored by the city’s deciding body on such matters, the Planning Commission. Vornado however has yet to move to build the property.
slideshow
Sales  ·  Commercial
National