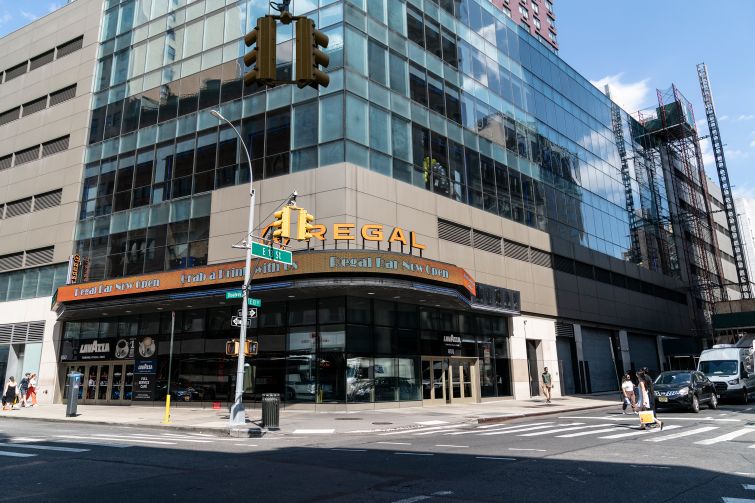 The theater at 850 Broadway is among 39 nationwide that are slated for closure. Other prominent theaters include South Beach Stadium & IMAX in Miami and the Sherman Oaks Galleria in Los Angeles, according to a bankruptcy filing obtained by Deadline.

Cineworld did not immediately respond to a request for comment, so it is unclear when these locations will run their final reel. The filing, however, has a lease “rejection date” of Feb. 15.

Regal Union Square, on the corner of East 13th Street and Broadway, opened in 1998 by United Artists and was later taken over by Regal Entertainment Group, according to EV Grieve. Cineworld took over the Manhattan theater in 2017 when it acquired Regal.

It will be the second iconic Regal movie theater to shutter in the city recently after Regal suddenly closed Regal UA Court Street in Downtown Brooklyn last year after a nearly two-decade run, blaming a rent increase from its landlord.

Cineworld began considering bankruptcy in August 2022, claiming it had not succeeded in recovering pre-pandemic attendance after theaters in many areas nationwide were required to close due to the health crisis. It filed for Chapter 11 on Sept. 7, 2022, obtaining $1.94 billion in debtor-in-possession financing to keep operations running while urging landlords in the U.S. to “improve” lease terms.

AMC Entertainment Holdings was reportedly in talks to buy the bankrupt Cineworld last year, but AMC said negotiations ended in December, and a Jan. 3 investor update from Cineworld said “neither it nor its advisers have participated in discussions” with AMC on a sale.

But the London-based Cineworld Group isn’t opposed to any opportunities to sell parts of the company, it would seem.

“In parallel with developing a plan to restructure the group’s capital structure, the company will also run a marketing process in pursuit of a value-maximizing transaction for the Group’s assets, focused on proposals for the Group as a whole,” the filing continued.