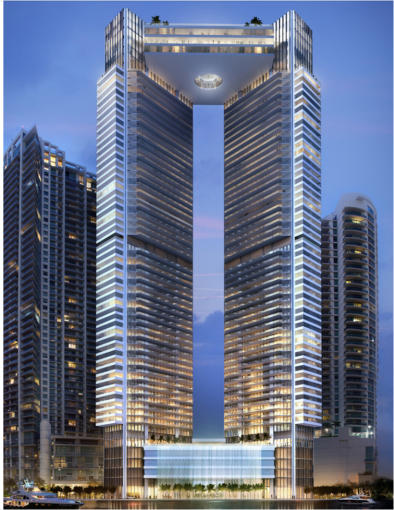 Fortune International Group and Kar Properties secured a $38 million loan to kick-start construction of a stalled luxury condo complex along the Miami River in Downtown Miami.

The mortgage from Bank OZK will fund the initial construction, such as site preparation, of the One River Point project, which will include two 66-story towers with 368 units in total when completed, Kar Properties founder and CEO Shahab Karmely told Commercial Observer.

“It’s going to be a high-water mark [project] in terms of design, luxury service and amenities for the market in Downtown Miami,” Karmely said.

Kar paid $27.5 million in 2013 for the site and, two years later, unveiled renderings and launched sales for One River Point. But construction never got underway and the land remains vacant.

In November, Kar revived the project by forming an entity with Fortune, led by Edgardo Defortuna, to buy the site for $58.8 million.

Karmely hopes to begin vertical construction in the second or third quarter of 2023 with the development’s completion within three and a half years. A representative for Fortune did not immediately respond to requests for comment.

The development is the third partnership between Miami-based Fortune and New York-based Kar.

Fortune, which also runs a brokerage, led the sales of Kar’s 2000 Ocean condo building in Hallandale Beach that was completed in late 2021. In the same year, the duo bought the remaining 81 condos at Brickell City Centre’s Rise and Reach towers from developer Swire Properties, paying approximately $65 million.

Inside the same gated community as One River Point, facing Interstate 95, Kar owns vacant sites, where it had proposed building offices prior to the pandemic. Now Karmely is debating whether to continue with the initial plans or build another condo building.