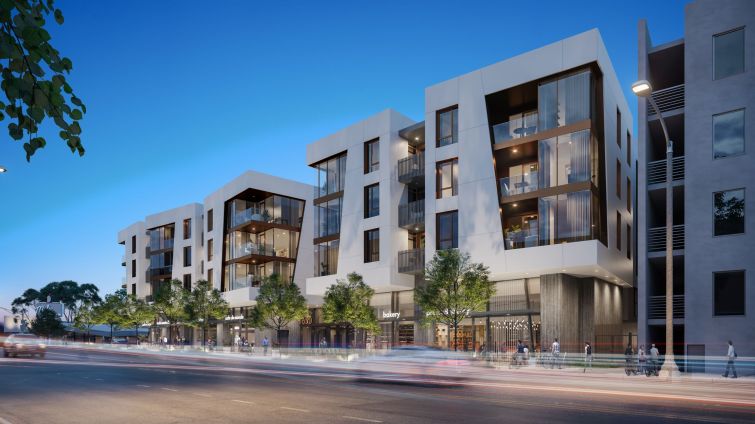 The investment from BIG — a minority- and women-owned (MWBE) CRE investment platform led by CEO and founder Tammy Jones— equates to 11 percent of the development’s total equity commitment.

“This partnership illustrates our commitment to embedding diversity into all aspects of our business,” Rob Speyer, CEO of Tishman Speyer, said in a statement. “By making a conscious effort to remove structural and institutional impediments to equitable representation, we strengthen our firm and the communities served by our investments.”

Tishman acquired the eight-parcel site from WS Communities in January 2022  with early plans to build a mixed-use development on the fully entitled site, The Real Deal reported. Now in the pre-development stage, the two-phase project will ultimately bring 617 new housing units — 116 of which will be affordable — plus 31,000 square feet of retail to Downtown Santa Monica.

“Inclusive capital matters and we are excited to partner with Tishman Speyer in their commitment to providing investment opportunities in large-scale development projects for MWBE capital providers like Basis,” Jones said in a statement.

The deal is Tishman’s first residential project in the L.A. area, but it isn’t the first time that Tishman has partnered with diverse investors.

BIG’s investment in the Santa Monica Collection follows a $30 million investment Tishman Speyer sourced from 161 Black and Latinx investors for its Enterprise Research Campus in Boston’s Allston neighborhood in 2021 — being developed in partnership with Harvard University following the selection of Tishman as its developer in late 2019.

In that transaction, Tishman beat its own initial goal of allocating 5 percent of the project’s $500 million in total equity to minority investors.

“For the Harvard project, we worked with several individual Black and Brown investors,” Joe Ritchie, managing director of diversity, equity and inclusion at Tishman Speyer, told CO. “We were having active discussions with several minority-owned investment managers, and that included conversations with Basis, particularly Tammy Jones and Dale Burnett [partner and managing director of BIG Equity]. The Santa Monica opportunity fit [BIG’s] profile, we had additional equity to raise for that deal, and that started the general conversation.”

BIG was founded by Jones in 2009. With a team that’s 75 percent diverse, the company has invested $1.3 billion in diverse sponsors and more than 50 percent of its vendors are either diverse or women-owned, according to information from BIG.

“The ability for a diverse firm to write middle-market-sized checks  while investing in large-scale development projects is a niche opportunity and a game-changer for our investors,” Burnett said in a statement, adding that BIG looks forward to growing the partnership with Tishman as well as “other large-scale developers looking to be more inclusive in their investment and lending partnerships.”

“We have strong programs for recruiting and retention internally, but we also look at how we lead the market from a diversity standpoint,” he  said.  “We’re looking to center and prioritize diversity in the execution of our core businesses, and, as we’re thinking about putting deals together and raising third party capital, we’re increasing diversity in the capital stack. We’re embedding diversity into all aspects of our firm, and the key point here is: there is great business value to diversity.”