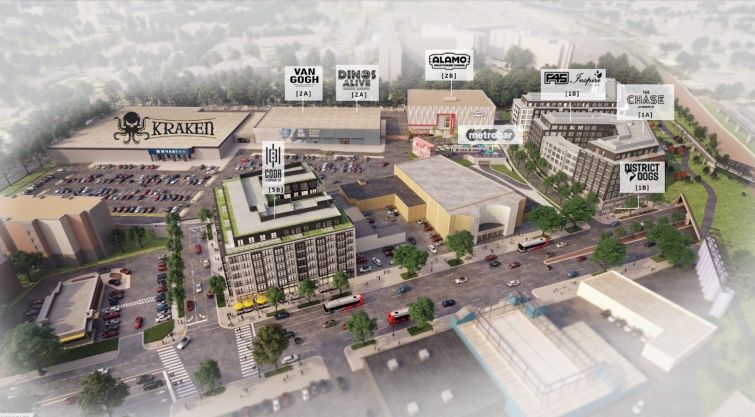 The facility will span 70,000 square feet and include 16 pickleball courts, a tavern and the District’s first indoor roller-skating rink, according to MRP Realty.

“We at MRP have sought out the most engaging concepts such as F-45 Fitness, MetroBar in a renovated railcar, Alamo Cinema & Drafthouse, and the Van Gogh & Dino’s Alive Immersive Exhibits,” Zach Wade, principal with MRP, told Commercial Observer. “This is a continuation of that strategy and presents a fantastic opportunity to provide a physically active use that both our residents and surrounding community will enjoy.”

Bryant Street NE is a mixed-use multiphase community and entertainment center in the Edgewood neighborhood of the District, located along Rhode Island Avenue. Phase I includes 487 residential apartment units and 47,000 square feet of retail. It also features a plaza with access to the Metropolitan Branch Trail and the new pedestrian bridge to Rhode Island Avenue metro station.

Kraken Kourts is the latest pickleball facility to open in the region, which is suddenly full of them.

“What is amazing about pickleball and roller-skating is that both sports have this mass appeal — no matter how old or athletic you are, both are activities that everyone can enjoy,” Anna Valero, president and co-founder of the Kraken experiences and Hook Hall, said in a prepared statement. “We will focus on the experience for everyone — from players to spectators — with lounge seating in courtside cabanas and a food and drink menu featuring local favorites.”

Indoor lawn games and shuffleboard will surround the pickleball courts in a beer garden-like atmosphere. There will also be private party spaces, according to Valero.