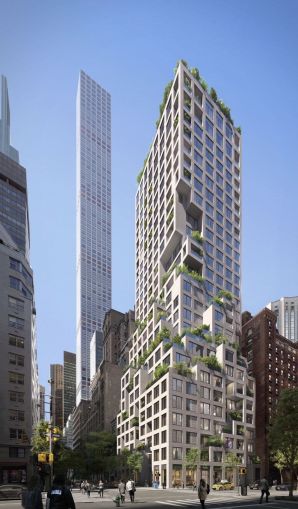 MRR, led by developer Rotem Rosen and billionaire Anand Mahindra, in partnership with fellow billionaire Hagag, purchased the property at 126 East 57th Street for $103 million in 2019, and then demolished the existing brownstone on site. In its place will rise a 28-story residential tower designed by ODA.

Construction on the site, which runs the width of a city block along Lexington Avenue, began this summer. When completed, it will include 145 condos spanning roughly 180,000 square feet. Recent renderings show a fractal tower, with asymmetric outcroppings that allow for multiple units to have outdoor access. It will also include a six-story atrium that doubles as a lobby.

The $170 million financing from Bank OZK was all senior debt, with no additional mezzanine financing, according to a source close to the deal.

Simon Ziff and Jason Krane of Ackman-Ziff brokered the deal for MRR. Fried Frank represented the legal side for the borrower, and King & Spalding did so for the lender.