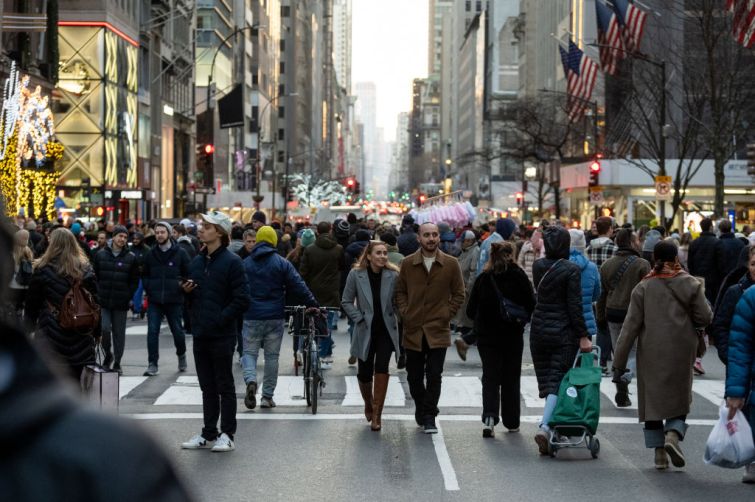 A 1-mile-long stretch of Fifth Avenue could get more pedestrian friendly under a plan to expand the sidewalk and add more green space to the block, in an effort to make it easier for visitors to get around the busy shopping district, Mayor Eric Adams announced Sunday.

The city plans to add a series of measures along Fifth Avenue, from Bryant Park to Central Park, in an effort to ease pedestrian congestion on sidewalks and make the road safer for cyclists. Adams’ proposal comes after the city temporarily closed a large stretch of the shopping thoroughfare to traffic for this holiday season.

Details were scant on what the proposal would entail, only that the sidewalks would be expanded and new trees be planted, but the city said some charges would start as early as next year. It will likely include more outdoor seating and potentially the loss of a traffic lane on Fifth Avenue, said Dan Biederman, executive director of the Bryant Park Corporation, which will split the cost of the plan with the Fifth Avenue Association, the Grand Central Partnership, the Bryant Park Corporation, the Central Park Conservancy and the city.

Biederman expected the changes to make Midtown more inviting to tourists and ease congestion on the street’s crowded sidewalks.

“Pedestrianized streets when we have good weather, which is really sometime between 125 and 200 days a year, are really joyful,” Biederman said. “Midtown has a busy and exciting street life, which I think has come back to 2019 levels.”

Adams’ plan is designed to build on the success of the Bill de Blasio-era Open Streets program, which closed off a peak of 83 miles of roads to cars in 2021. Open Streets helped boost sales at restaurants and bars on closed thoroughfares to 19 percent above 2019 levels in 2020 and the first six months of 2021, while nearby corridors that remained open to traffic saw sales drop 29 percent below 2019 levels, according to a New York City Department of Transportation report. Adams expects the project to do the same for Fifth Avenue’s businesses.

“Fifth Avenue is an iconic corridor and an engine of our Midtown economy,” Adams said in a statement. “But it is also an unmissable opportunity to show the city and the country how world-class public space can help create vibrant central business districts.”