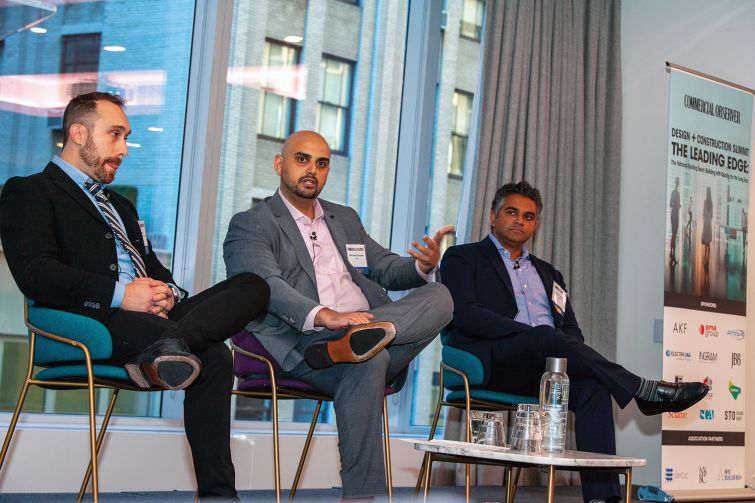 Cost, communication, climate change and building intelligence were very much on the minds of those attending Commercial Observer’s Design + Construction summit, “The Leading Edge: The National Building Boom; Building With Quality for the Long Term” at etc.Venues in Midtown Manhattan on Oct. 27.

“Repositioning office stock — the cost of it is increasing every day,” Chris Mills of mechanical contractor Electra USA said in opening his panel “Repositioning Building and Infrastructure for a New Market.” Mills then asked his panelists of construction managers: “How do you balance risk with reward in a reconstruction project?”

“The white elephant in the room is the supply chain,” answered Joel Brenner of Global Holdings, one of the members of a panel that also included Brooks McDaniel of STO Building Group and Thomas Gallagher of JRM. “You have to have some backup plans.”

The summit tackled a number of pressing issues that went well beyond repositionings, including an opening keynote from Sara Lopergolo, a partner at Selldorf Architects, who was interviewed by Sciame Construction President Joseph Mizzi, and discussed the state of architecture (from designing for an upended work schedule to finding good architects). The subsequent panels dealt with making older buildings carbon neutral; BI, or building intelligence, and the design of smarter buildings; life science construction; carbon neutrality and more.

“[It] was clear that systems were being designed in silos,” said Mahmoud Shouman of engineering consultancy JB&B on the first panel of the morning, “Designing Advanced Facilities in the Age of Smart Buildings” about some of the problems recently seen in smart buildings. “It’s clear we need to talk to each other … systems communicating with each other on a common platform. We need to talk to the owners about their desires and translate that into tangible outcomes.”

Shouman was joined by L+M Development Partners’ Andrew Wohl and Ameet Amin of access firm Kastle Systems in a conversation that was moderated by AMA Group’s Arthur Metzler. Among the issues that BI is most heavily focused on commercially include building-wide Wi-Fi, smart locks, and smart water metering “which monitors for actual usage,” said Metzler.

However, there is “demand in multifamily space for some of the technology Andrew mentioned,” said Amin. “From a resident’s perspective [they want to] enter the building, enter the apartment, enter the amenity space, all using the phone. If I’m at work I want to let the dog walker or the babysitter into my home through my phone.”

In commercial buildings, however, Shouman said that the stakes are even higher. Smart buildings have to “earn the commute,” with one developer Shouman is working with asking “for the world: the smartest building in the city, every system is open, car charging in the garage, allowing systems to work with other systems, digital twins, mobile access — really pushing the envelope.”

Perhaps the most pressing issue addressed at the summit was the issue of carbon neutrality and its relation to climate change.

“We don’t talk about climate change when we talk about [ESG or carbon reduction], we talk about the business case,” said Dana Robbins Schneider, the director of energy, sustainability and ESG for Empire State Realty Trust in a fireside chat with Steve Levine of AtmosAir. “We know [carbon neutrality] attracts tenants.”

To move forward, the industry needs to follow the science and figure out what the benchmarks are for the healthiest, most sustainable buildings, Robbins Schneider added.

Among the more in-demand real estate assets that much of the construction industry is focused on today is life sciences, and how to cater to it was the topic of “Life Sciences: A New Foundation for the Research Economy.” That panel was led by Mark Coe of developer Lendlease and featured Walker Shanklin of SGA, an architecture and design firm; Scott Metzner of developer Janus; Marc Carola of engineering firm AKF Group; and Nancy J. Kelley of her eponymous building firm.

Life sciences assets generally need to be purpose-built because the industry is evolving rapidly — from being dominated by Big Pharma and chemical research to precision medicine and venture-backed startups, Kelley said. “We are literally writing new biological products into the world right now.”

Lunch followed a final fireside chat hosted by Jessica Rothman of the law firm Ingram Yuzek Gainen Carroll & Bertolotti that featured remarks by Julissa Guiterrez, the chief diversity office of New York State. There’s been a surge of interest in diversity since the George Floyd protests in 2020, Gutierrez said, and it needs to be sustained. “We don’t want it to be a pulse-checking moment,” she said. “It needs to be consistent.”

Jane Smith, a founding partner of Spacesmith, who has worked on projects as varied as the U.S. embassy in Mexico City to the residence hall at New York’s School of Visual Arts, received the Barrier Breaker Award. Donna Brady of Ballard Spahr, a transportation, water and energy specialist who co-authored the Federal Highway Administration’s study on toll collection, received the Innovation and Technology Award. Blima Ehrentreu, the co-founder of The Designers Group who has done interior design for more than 300 projects, was given the Woman on the Rise Award.

Update: An earlier version of this story said that Donna Brady advised the state of California on water-purification procedures, which was incorrect. That has been removed from the story.