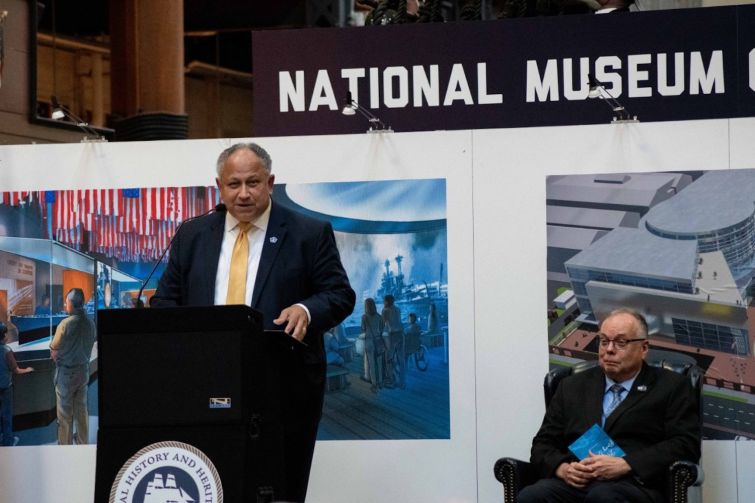 Secretary of the Navy Carlos Del Toro speaking to audience members at the National Museum of the U.S. Navy during a ceremony celebrating the Navy’s 247th birthday. Photo: NHHC

The U.S. Navy is on a quest to build a new U.S. Navy Museum campus in Washington, D.C., and it’s enlisting architects to contribute conceptual designs and ideas for the museum.

Currently, the Naval History & Heritage Command (NHHC) is engaged in the feasibility analysis phase of the development, which will likely be on or near the grounds of the Washington Navy Yard. Its current museum has been at the old Naval Gun Factory at 736 Sicard Street since 1963. It’s unclear what will happen to the current museum when the new one is completed.

The current vision for the campus includes a new building and ceremonial courtyard, as well as the potential renovation of existing historical buildings. The campus would comprise nearly 270,000 square feet, including 100,000 square feet of net gallery space.

Due to the complexity and breadth of the project, the NHHC has put out a Request for Qualifications (RFQ), open to architecture firms, as part of an “artistic ideas competition” for the museum

Last month, Secretary of the Navy Carlos Del Toro announced the Navy’s preferred location for the museum would be on land adjacent to the Washington Navy Yard that would be acquired either through a land exchange or direct purchase.

“The exhibits of this new museum will create a living memorial to the U.S. Navy’s heritage of victory and valor, bringing to life the human experiences of serving at sea,” Del Toro said at a press conference. “It will give all the visitors of the future museum — regardless of their previous military experience — a greater appreciation and understanding of the economic and diplomatic importance of what a strong and robust Navy means to our national and economic security.”

For security reasons, the Navy is looking to acquire approximately 6 acres of land immediately outside the Tingey Gate at the Washington Navy Yard, according to someone close to the project.

The new National Museum of the United States Navy (NMUSN) campus is expected to offer an educational, cultural and ceremonial center for all visitors, including active-duty sailors, veterans and the public.

“Navy leadership has had a long-held vision to build a state-of-the-art museum that will create a living memorial to the U.S. Navy’s heritage of victory, valor and sacrifice,” a spokesperson for the project told Commercial Observer. “The goal of the new NMUSN campus is to provide visitors a greater understanding of the role the U.S. Navy has played in ensuring America’s national and economic security throughout its history and demonstrates the Navy’s vital importance in today’s global environment.”

The RFQ will prescreen qualified respondents and select five finalists to assist in developing artistic ideas for the new museum campus.

The finalists will receive a stipend of $48,000 each to develop a submission.