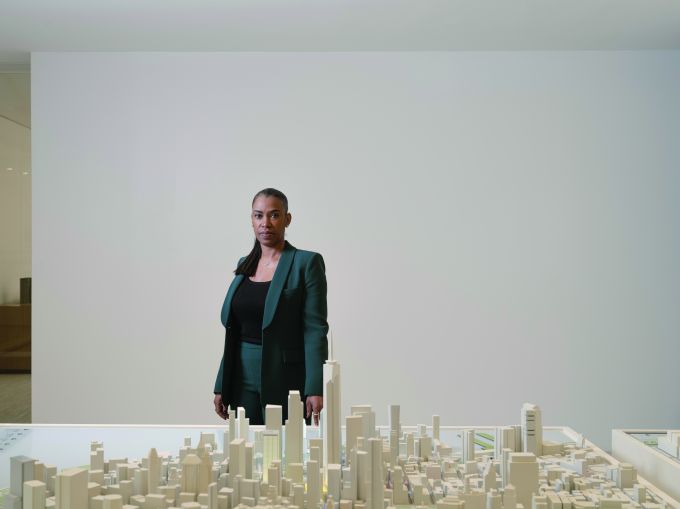 Nailah Flake once had visions of becoming a professional dancer with New York’s famed Alvin Ailey American Dance Theater before her journey took a far different path toward commercial real estate finance while majoring in economics at Spelman College.

“I realized very quickly that I didn’t want to be a starving artist so I decided to keep dance as a side passion,” said Flake, who was offered a full scholarship to the dance program at Southern Methodist University in Dallas while a high school student at Saint Francis Prep in Queens. “Somehow I went from almost dancing for Alvin Ailey to being a commercial real estate lender.”

Life as a lender in 2022 can take on a gymnastic feel, trying to find that delicate balance of deciding what deals to pursue while navigating turbulent market conditions that have put many CRE valuations in limbo, especially in the office sector. Flake has pivoted Brookfield’s lending portfolio from a heavy focus on this more uncertain office space to an increasing number of multifamily and industrial deals.

Prior to the COVID-19 pandemic in early 2020, office transactions accounted for more than 65 percent of Brookfiend’s open-ended loan portfolio launched in 2018. Today that number is down to just under 50 percent. And while Brookfield remains committed to pursuing select office assets with strong tenants, Flake says her team is firmly focused on attacking a number of property sectors in the current economic climate.

“The idea around bringing down office concentration and having a more diversified portfolio had more to do withs sticking with the theme of doing high-quality lending on high-quality assets and just really leaning in to the opportunities that we’re seeing,” Flake said. “It doesn’t mean that we’re running away from office, but there’s a lot of reasons why being more diversified in this day and time makes a lot of sense.”

Responding to volatile markets is nothing new for Flake. Before arriving at Brookfield in May 2017, she spent 16 years at Morgan Stanley, a period that included the 2008 global financial crisis (GFC). As a vice president in Morgan Stanley’s commercial real estate lending group at the beginning of the crisis, Flake learned to manage through the most extreme circumstances while still leading Morgan Stanley’s expansion of its lending platform from primarily commercial mortgage-backed securities to balance-sheet loans.

“It was a really rough time in the business, but it created a lot of opportunity for me to stretch myself working on restructurings, trying to keep myself busy when we weren’t doing new loans,” she said. ”As a deal junkie, that was tough sometimes, but really keeping a perspective that I was a part of an organization like Morgan Stanley and understanding the economy has its ups and downs and realizing that once the market came back that I would have a really good seat. It played out very well for me because, when the market came back, my boss, Jim Flaum, came back to run large loans, I had an excellent seat, and it was a great time to be a lender, because we were really just trying to reinvent ourselves.”

One of Brookfiend’s signature deals in the second half of 2022 involved supplying a $272.5 million construction loan for Vanbarton Group’s office-to-residential conversion project at 160 Water Street in Manhattan’s Financial District. The redevelopment of the former headquarters for New York City Health and Hospitals Corporation into 588 rental apartments underscores market shifts, with more demand for multifamily properties than office space as hybrid working trends endure.

“She can respond to the needs of borrowers very quickly and with certainty,” said Chris Reilly, managing partner at Brookfield Real Estate. “She is always calm and cool under the various pressures that arise during the closing process.”

Acquisition financing accounted for nearly 60 percent of Brookfield’s debt investments last year across the fund vehicles it manages, but rising interest rates in the second half of 2022 have altered this strategy. Flake said Brookfield’s debt investments have of late been more centered around refinancings and recapitalizations with plenty of construction deals also in the pipeline.

Zach Levine, who Flake hired as an originator at Morgan Stanley and later Brookfield, said the veteran lender strikes an ideal balance guiding her staff and borrowers through complex transactions when faced with market obstacles.

“From a leadership perspective, her greatest skill is identifying talent and providing people room to maneuver without micromanaging,” said Levine, who recently left Brookfield to pursue an MBA at the Stanford Graduate School of Business. “She walks a difficult line of giving her originators and senior underwriters a great deal of freedom to take on face time with senior executives, leadership roles in the organization, and responsibilities while also providing support to make sure they don’t get over their skis.”

No geographic market is completely off the table for Flake depending on the asset and property type. Still, she says  there is a more “cautious” approach toward office deals in certain slower recovering downtowns such as San Francisco and Chicago. However, markets like the Bay Area and Windy City are also presenting strong opportunities for deals in the multifamily sector as Brookfield increases its focus on a property type that has seen increased momentum during the pandemic.

A big near-term and long-term goal Flake envisions is growing the firm’s separate managed account business as a way of boosting lending on behalf of its insurance subsidiary, Brookfield Reinsurance. She said Brookfield has historically managed nearly $6.5 billion of actively managed capital, mostly in the form of funds.

Beyond lending, Flake is committed to spearheading Brookfield’s ongoing efforts to diversify its workforce, such as through a dedicated internship program that focuses on attracting candidates with diverse backgrounds. The firm also established a number of employee engagement groups as part of its diversity, equity and inclusion initiatives, including a Black professionals network, an Asian professionals network, a women’s network and a Pride network.

“I’ve been pleased with the support and infrastructure in place, both for women and people of color, and we’re going to continue to find ways to make sure that our employee base is diverse,” Flake said. “It’s a real passion of mine to see other young women and other people of color be able to take advantage of these opportunities.”

As one of the few Black women in a CRE finance world traditionally dominated by white men, Flake says she takes pride in bringing a unique background to the table. Flake said attending Spelman — one of the top-ranked historically Black colleges and universities in the nation — and learning from mentees in the business has taught her to bring authenticity into the job. That, she said, has translated into becoming a better originator and leader.

“Whereas most people at her level can maintain an arms-length relationship with their employees, Nailah seeks to learn more about her people and what makes them tick outside of the office,” Levine said. He recalled fond memories of grabbing after-work drinks with her at Seamore’s and PJ Clarke’s, and hearing “war stories” of analyst years at Morgan Stanley. “Nailah has the ability to connect at a human level, which makes her a joy to work for.”

Flake has fostered close relationships with colleagues the past five and a half years at Brookfield while striving to build a positive team environment, a goal that took on an even greater importance when combating challenges driven by the pandemic — and now today with market volatility. She remembers how much growth occurred in her career during the GFC, learning from senior staff.

Today, Flake looks to pass along the insight she gained at Morgan Stanley during the GFC days to the future leaders of CRE finance while they dance through a new reality of restructurings becoming more the name of the game than traditional acquisitions.

“We’re going through turbulent times, but it’s a great time to help the next generation learn and keep a perspective,” she said. “I’m enjoying spending time with them and teaching them things that you don’t necessarily get to learn when you are just working on new deals.”